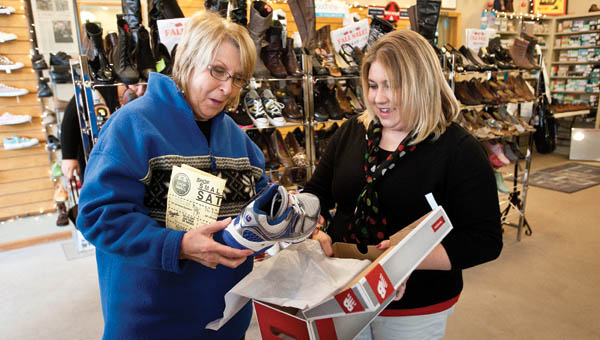 The crosswalks were full of eager shoppers with yellow coupon sheets in hand. People meandered through stores’ aisles, children lined up to see Santa Claus and trolleys transported potential customers from destination to destination during Ironton aLive’s “Small Business Saturday.”

Aimed at drumming up business for shops, “Small Business Saturday” is a nationwide effort in cities and towns that are attempting to revive and revitalize their downtowns.

“We have had a good turnout,” Rich Blankenship, Ironton mayor, said. “Stores are doing well and I see plenty of people. This event is a great thing for the City of Ironton.”

Santa and Mrs. Claus arrived at the Transit Center around 9 and an unofficial count at 11 a.m. showed over 250 children had taken their picture with Santa and decorated sugar cookies with Mrs. Claus. The Ironton-Lawrence Community Action Organization (CAO) and St. Mary’s Ironton Campus sponsored the Santa and Mrs. Claus.

“I’m tickled to death about how good it’s going,” Jon Ferguson, executive director of Ironton aLive, said. “It’s been a pretty good success. People are using their coupons and riding the trolley from place to place.”

Ferguson said the number of shoppers would increase at the conclusion of pictures with Santa around noon.

Unger’s Shoes was one of many stores that were hotbeds of activity during the event. Regular and new customers alike took advantage not only of the $5-off coupon, but also the popping of a balloon that contained an added discount within.

“We have been really, really busy,” Joe Unger, owner, said. “I have had multiple people tell me they are here just because of the ‘Shop Small’ event. Ironton aLive did a tremendous job with this whole thing.”

Arion Smith, of McDermott, has a foot ailment that hinders her ability to walk easily. She is a regular Unger’s customer but “Small Business Saturday” prompted her to make the trip to Ironton.

“I only buy shoes here,” Smith said. “I want to support this store as much as possible. If it weren’t for the shoes I buy here, I couldn’t walk.”

Funding to aid in paving projects

Two county road projects will get outside funding to pave and install safety edges in Elizabeth, Aid and Lawrence townships.... read more