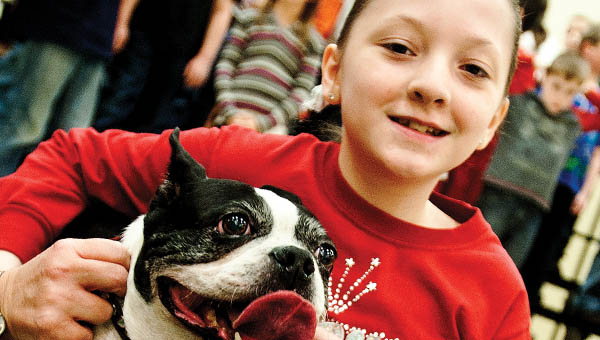 DEERING — Lauren Simmons made a promise to her great-grandmother just before she died that her beloved Boston terrier would always have a home.

“She told my grandmother when she was in the hospital that she would take care of the dog,” Johnda Simmons, Lauren’s mother, said.

Not only has she kept that promise, Lauren thought the terrier’s devotion to her great-grandmother was so impressive that she wrote about it in her essay submitted to the Lawrence County Auditor Jason Stephens in his inaugural dog tag contest.

That’s why Peighton was named the Lawrence County’s Top Dog on Friday.

Stephens came to Dawson-Bryant Elementary School to surprise the fourth-grader with a specially designed trophy and the No. 1 dog tag.

Early Friday morning Lauren was in the cafeteria practicing for the upcoming Christmas play with her classmates. After Stephens was introduced to the children, he explained how he started the contest to encourage dog owners in the county to purchase the mandatory dog tags.

Fees from the tags go to support the shelter that in recent months has worked to find rescue groups to find homes for the unwanted dogs, instead of euthanasia.

When Stephens announced that the 2014 Top Dog for the county was Peighton, Lauren’s hands went up to her face in surprise. Then she was awarded the trophy and dog tag.

“This is the first time I have ever won a trophy for my dog,” she said.

For the initial contest Stephens said he was pleased with the number of participants and their essays.

“Hopefully we will be able to do it next year,” he said. “The ultimate goal is to make people aware to buy dog tags for their dogs. It helps take care of the strays and unwanted dogs in our county and keeps the population under control. I would like to thank the staff of Dawson-Bryant for making this a surprise.”

Dog tags are on sale through the end of January at the auditor’s office, Tipton’s on State Route 93, Moore’s Hardware in Proctorville, Dickess Market on State Route 141 at Aid and the Chesapeake Veterinary Clinic. Tags at the auditor’s office cost $12 for the year. At the other locations, the cost is $12.50. Tags may also be purchased online at www.lawrencecountyauditor.org for $14.

Shelly Betz has been named marketing and public information officer for Ohio University Southern. Reporting to the school’s dean in... read more