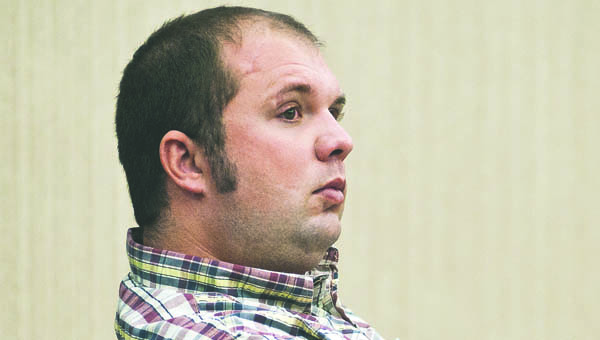 Who was driving the black 1995 Ford Mustang convertible that went off State Route 93 on June 29, 2012, hitting a tree and ejecting both occupants, leaving one dead and one with permanent brain damage?

The prosecution says it was the owner of the car, 28-year-old Nathan Bloomfield, who drove that day and who had been drinking with the victim, 62-year-old John Markel.

“Everyday in our lives, we make choices,” Prosecuting Attorney Brigham Anderson said Thursday at the start of the trial. “Nathan Bloomfield made a series of choices that cost John Markel his life.”

The defense counsel suggests that there is no evidence, forensic or otherwise, to suggest Bloomfield was driving the car that day.

Evans also noted that Bloomfield suffered extensive injuries from the accident and spent about 58 days in a coma and months in the hospital. The most recent testing indicated Bloomfield now has an IQ of 66.

Today, a jury of 12 will decide, based on the testimony of eight witnesses, if Bloomfield is guilty or innocent of aggravated vehicular homicide.

In his opening statement, Anderson replayed the day of the accident for the jurors.

June 29, 2012, was the day an intense windstorm, known as a derecho, swept through Ohio, knocking down trees and power lines and causing widespread damage.

Bloomfield and Markel had been working early that day.

Both men, friends who rode to work together everyday, Anderson said, were employed by Barcus Pool Supply and had been working with a crew to install a swimming pool in the Vesuvius Estates neighborhood.

The crew quit working in the early afternoon to beat the heat and proceeded to purchase some beer at Tipton’s Grocery Store and head to the home of their boss Grant Barcus’ to start the Fourth of July weekend.

Some time later, Anderson said, Bloomfield and Marcus left to meet up with other friends, and eventually to get gas and cigarettes at the Rich Oil station on State Route 93.

Mary Sparks, cashier at Rich Oil, was working the evening of the crash and remembers Bloomfield buying gas and cigarettes. She testified that Bloomfield was driving when the men arrived at the station.

She also said she remembered both men being visibly intoxicated.

“They were stumbling around,” Sparks said.

Sparks said she could see from the store window that Bloomfield also drove the car off the parking lot and headed northbound of State Route 93.

Kimberly Akers, witness for the defense and Bloomfield’s aunt, said she was driving by Rich Oil and saw her nephew. She said the gas station looked “extremely busy” and where his car was parked at the pump, the cashier would have had a difficult time seeing who drove off in the car.

Although Anderson and Evans differ on who drove the convertible, top down, after leaving the gas station, what was not up for debate was the fact that while the car was headed north on State Route 93, the vehicle lost control and veered off the right side of the roadway at about the 11 mile marker.

The car hit an exposed pipe in the ditch, then became airborne and hit a tree.

The men were ejected from the car, although Markel was nowhere to be found when passersby and emergency responders arrived.

Laura Harvey was the first Ohio State Highway Patrol trooper on the scene of the accident and was the prosecution’s first witness.

She said she saw Bloomfield lying partially in the road and ditch with some brain matter exposed as first responders worked to resuscitate him. She later testified that an EMT noted a smell of alcohol coming from Bloomfield as he was being intubated.

A blood alcohol test was taken following Bloomfield’s transport to King’s Daughters Medical Center by court order and revealed the man was 0.146, one and a half times over the legal limit.

Anderson displayed the trooper’s accident scene photos for the jury as Harvey explained. The photos showed the mangled convertible lying on its side in the ditch, front end pointing to the ground.

Harvey said she heard that there may have been a passenger in the vehicle but a search of the area came up short.

“The only place I could think he would be was under the vehicle,” Harvey said.

Only after the car was hoisted with a chain did investigators and emergency workers find Markel. He has been under the car and some tree limbs.

Bill Nenni, medical death investigator for the Lawrence County Coroner’s office, would later testify that Markel’s cause of death was blunt force injuries to the head and neck, essentially an internal decapitation as the man’s spinal cord was detached from the base of his skull.

When Evans cross-examined Harvey, he asked if she could look at the two men and determine who had been driving at the time of the accident.

“He (Bloomfield) had been seen by several witness going down the road,” Harvey said.

Another witness, Ida Anson, was called by Anderson. Anson, 44, was at her mother’s home on State Route 93, less than a mile from the crash site the night of the accident and said she had known Markel all her life.

“I didn’t see the impact itself but I did see the car pass my mother’s,” Anson said.

The night of the accident, Anson gave a statement to OSHP Sgt. Nicholas Lunsford saying she saw the car go past her mother’s house and Markel waved at her from the passenger seat.

While on the stand, Anson said she didn’t know who was in the car and just assumed it was Markel based on what others had said.

“I really don’t know who it was but once I got up there everyone was hollering for Johnny Markel,” she said.

The woman also could not describe what Markel looked like despite having testified to knowing him her entire life.

Anderson and Evans are expected to give their closing statements this morning and the jury will deliberate and return a verdict.

The Ironton Fire Department was called out to a house fire on Orchard Hollow Thursday afternoon. The house was totally... read more