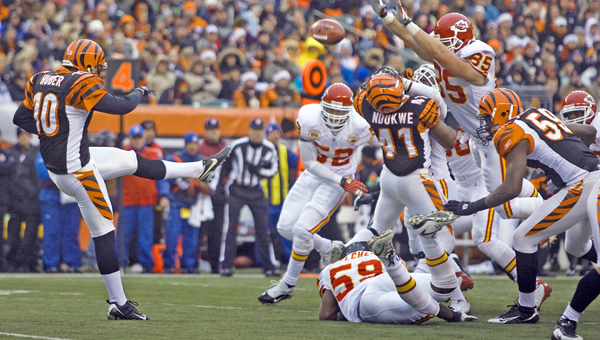 Cincinnati Bengals’ punter Kevin Huber has been lost for the season after suffering a broken jaw in Sunday night’s loss to the Pittsburgh Steelers. Huber is scheduled for surgery on Friday. (MCT Direct photo)

CINCINNATI (AP) — Kevin Huber is scheduled for surgery on Friday for his broken jaw, a season-ending injury that left the Bengals looking for another punter and holder to help them through their playoff surge.

Huber got hurt during a 30-20 loss in Pittsburgh on Sunday night. Terence Garvin blocked him during Antonio Brown’s 67-yard punt return for a touchdown, hitting Huber’s chin with the top of his helmet.

The Bengals (9-5) held tryouts for five punters on Tuesday and signed Shawn Powell. The second-year punter was released by Buffalo on Oct. 4 after rough games against Baltimore and Cleveland.

“Kevin has done a great job in his tenure here,” Powell said. “Hopefully I can get to do a little bit of what he’s done to help the team continue on its path of success.”

Huber went on injured reserve Tuesday, ending his streak of 81 consecutive games played, the longest on the roster. The Bengals’ medical staff expects Huber to make a full recovery and return next season.

“There should be no future ramifications whatsoever,” coach Marvin Lewis said.

Players had Tuesday off, but Huber visited Paul Brown Stadium and briefly watched the tryouts. On his way out, he told The Associated Press that he broke his jaw at the chin. He also has a crack in one neck vertebra that’s expected to heal without problem.

Huber grew up in Cincinnati, attended the University of Cincinnati and was drafted by the Bengals in the fifth round in 2009. He’s been a vital part of the Bengals’ success with his long punts.

Last season, he set club records for net and gross average. He ranks eighth in the NFL this season with a net average of 40.5 yards.

“We’re replacing a kid who’s been a fine player for us,” Lewis said. “And unquestioned, he’s a great person, a kid that we’ve spent a great deal of time with, with him growing up here, going to UC, us coaching him at the Senior Bowl.

“He’s done a great job since we’ve drafted him. So it’s a shame that he misses out on the rest of the season.”

Lewis declined to express an opinion about Garvin’s block on Huber, which wasn’t penalized but is likely to draw a fine from the league.

“I think there’s been enough talk about it,” Lewis said. “There’s nothing I can do that will affect it any differently now, so we just need to move on.”

The Bengals chose Powell for their home game on Sunday against Minnesota (4-9-1) in part because of his experience at directional kicking — punting the ball to a specific area of the field. Powell did it with Buffalo, which gave him an edge with Cincinnati.

Powell punted and held for kicks at Florida State. He replaced Brian Moorman in Buffalo a few weeks into the 2012 season under coach Chan Gailey.

Powell felt his job was in jeopardy after he shanked punts during a 23-20 win over Baltimore on Sept. 29. The Bills released him a day after their 37-24 loss to the Browns. Cleveland’s Travis Benjamin returned seven punts for a club-record 179 yards, including a 79-yard touchdown.

Notes: Lewis said the rest of the team came through the game without serious setback. Linebacker James Harrison left in the first quarter with a concussion. “We seem to be OK,” he said. “So far, so good.” … CB Terence Newman’s sprained left knee is improving and he’s expected to do more in his workouts this week. Newman missed the game in Pittsburgh. “At the end of last week, he made significant progress with things,” Lewis said. “It’s a little different playing cornerback, and we’re going to be cautious with him.”

Jim Walker jim.walker@irontontribune.com   PROCTORVILLE — A couple of trips to the emergency room have left the Ironton Fighting Tigers... read more