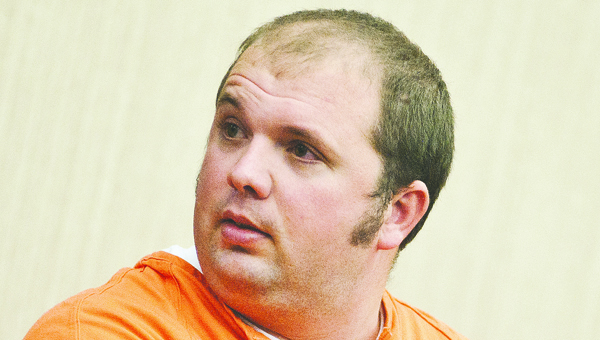 THE TRIBUNE/JESSICA ST JAMES
Nathan Bloomfield turns back to look at his family before being sentenced.

A decision to drink and drive forever changed the lives of two families and Wednesday, the case that had gone on for a year and a half finally came to an end with one man being sent to prison.

Nathan Bloomfield, 28, of Pedro, was sentenced to eight years in prison for the aggravated vehicular homicide of John “Cat” Markel on June 29, 2012. Bloomfield has a blood alcohol level of 0.146, one and a half times the legal limit in Ohio.

Before sentencing was handed down, Mike Markel, John Markel’s brother, spoke to the court and Bloomfield directly.

“The last year and a half has been rough on our family,” Markel said. “John Cat left behind a mother, two brothers, two sisters, five children and a wife.”

Markel also said he prayed his brother would have given up drinking and found God. He also asked that Bloomfield do the same.

“My prayer is you’ll be saved one day and get away from this drinking and live your life for the Lord,” Markel said. “Me and my family don’t hold anything against you. We know that John Cat liked you. … He thought a lot of you. He wouldn’t want to see you where you’re at today.”

Markel also asked the court to show leniency and mercy on Bloomfield.

Prosecuting Attorney Brigham Anderson did not recommend a specific sentence and instead asked Judge Charles Cooper to impose a prison term that would be “fair and equitable.”

“While the victim and the defendant were friends, they were both engaged in drinking that afternoon,” Anderson said. “They were both under the influence of alcohol that afternoon. It could have been much worse. Many more lives could have been lost as a result of the choices these individuals made. Society as a whole has an interest in seeing that drunk drivers are punished, that there are some deterrents for people who engage in that activity in hopes they won’t do it.”

Scott Evans, attorney for Bloomfield, also asked for the minimum sentence. Scott said Bloomfield has no recollection of the accident or the circumstances leading up to the accident.

Bloomfield suffered severe brain injuries from the accident and underwent mental health treatment before he was able to stand trial. But Scott said he is still at a diminished capacity.

“His body is with us,” Evans said. “He may enjoy a long life from this point forward. I can tell you in very real way, the essence of Nathan died on the side of the road that day beside John Cat.”

“Because of Nathan’s continuing affection for John Cat and out of mutual regard for your family, we did our very best through this trial to give Nathan the vigorous defense that he his entitled to, without ever attacking the memory of John Cat,” Scott said. “If we ever erred in that regard, I sincerely apologize and ask for your forgiveness. I have to say, because of Nate’s circumstances, if we ever did have such failings, the fault is mine alone and I would ask you place that responsibility on me and not on Nathan.”

Bloomfield was accused of causing the accident on State Route 93 in which he was driving a 1995 Ford Mustang convertible, top down, when he lost control of the car. The accident happened at the 11-mile marker when the car skidded off the right side of the road, hit an exposed pipe in the ground and went airborne. The underside of the car hit a tree, which severely damaged the vehicle.

Neither men was not wearing seatbelts and were thrown from the car. Markel was found under the car and tree limbs. His cause of death was ruled as blunt force injuries to the head and neck, essentially an internal decapitation as the man’s spinal cord was detached from the base of his skull.