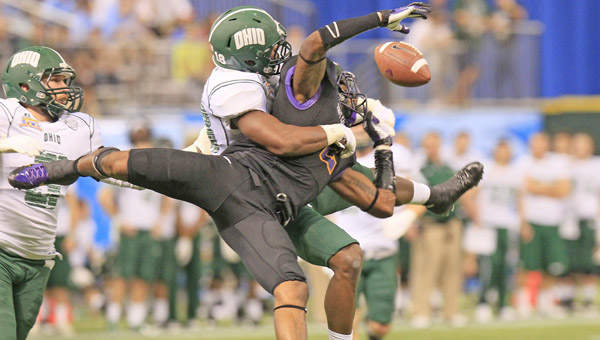 ST. PETERSBURG, Fla. (AP) — Ohio started slowly, and then surged into the lead. It faded down the stretch in the Beef ‘O’ Brady’s Bowl, making the whole game very much like the Bobcats’ season.

“That’s exactly what it felt like. We were up and down,” running back Daz’ Patterson said Monday after a 37-20 loss to East Carolina. “We were up and down. One minute we were having a good drive, and then we were shut down by one silly play or something silly. It felt like the whole season in a nutshell.”

Vintavious Cooper rushed for a career-best 198 yards for East Carolina, setting a Beef ‘O’ Brady’s Bowl record. The Pirates (10-3) grabbed the lead for good on the first of Cooper’s two touchdowns runs in the fourth quarter, a 31-yard burst with just under 10 minutes remaining.

“A win would have made this a whole lot better,” Bobcats receiver Donte Foster said. “It would have made it very tremendous, but I felt like our guys played their hearts out.”

East Carolina’s Shane Carden threw for 273 yards and one TD and also scored on a pass reception.

Cam Worthy caught an early 5-yard scoring pass from Carden, and then took a lateral and threw 14 yards back to Carden for a fourth-quarter TD that made it 31-20. Cooper put it well out of reach, finding an opening off left tackle and racing 22 yards for his second TD.

Tyler Tettleton and Derrius Vick threw scoring passes for Ohio (7-6), which overcame an early two-touchdown deficit to lead 20-17 before Cooper put East Carolina back in front before an announced crowd of 20,053 at Tropicana Field.

“We picked up our tempo there in the second half, and I felt like that affected them a lot. We could see they were getting tired, so we tried to continue to speed up the game and try to use that to our advantage,” Foster said. “We got in a good rhythm there for a while and then adversity hit us, and we just didn’t respond the way I wish we would have.”

Tettleton and Vick each threw a touchdown pass in a five-minute span to make it 14-all early in the second quarter.

Tettleton got the Bobcats going with a 26-yard completion to Patterson on a flea flicker, and then found Patterson for a 17-yard TD on the following play. Vick and Foster combined for an 80-yard score on Ohio’s next offensive play for the longest scoring pass in Beef ‘O’ Brady’s Bowl history.

“They’re a very, very physical football team on the defensive side, and very strong. Generally you’re not going to traditionally line up and just run the ball right at them and feel like you’re going to be successful,” Bobcats coach Frank Solich said. “We had to come up with ways that we felt we could continue to make plays and then hopefully have our fair share of big plays.”

Foster finished with six catches for 160 yards, earning most valuable player honors for Ohio. Tettleton was 21 of 40 for 228 yards, one touchdown and three interceptions.

The Bobcats took a 20-17 lead on Josiah Yazdani’s 28-yard field goal early in the fourth quarter, and then recovered a perfectly executed onside kick.

“We didn’t convert when we had the onside kick and had a chance to put points on the board,” Solich said. “Not putting points on the board there, I think, really hurt us. That was a critical time in the game, no question about it.”

East Carolina rebounded from a triple-overtime loss to Tulane in October to win five of its final six regular-season games. Ohio stumbled in November losses to Buffalo, Bowling Green and Kent State before finishing with a 51-23 rout of Massachusetts that helped the Bobcats secure the trip to St. Petersburg.

Ohio accepted the bid to the Beef ‘O’ Brady’s bowl after the American Athletic Conference was unable to fulfill its bowl commitments. Ball State lost to Central Florida in last year’s game, making the trip when the Big East was unable to supply a team.

Jim Walker jim.walker@irontontribune.com   HUNTINGTON, W.Va. — Keith Clemons and Payne Meadows did most of the damage all night, but... read more