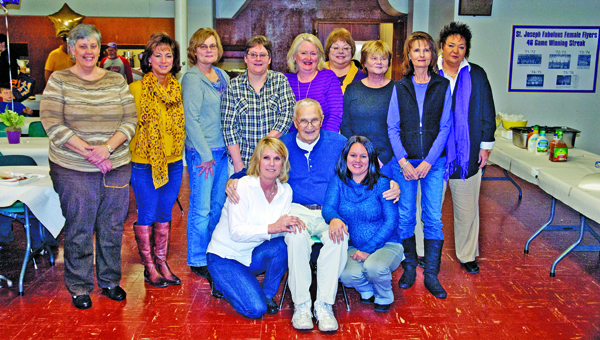 A request by three girls and a new pair of tennis shoes started the first girls’ high school basketball dynasty.

In 1971, Terri Hannon and sisters Barb and Cindy Holmes wanted to start the girls’ basketball team at Ironton St. Joseph. The trio went to a first-year female teacher Mary Jane Handley with hopes of her becoming the coach.

Handley — who taught at St. Joseph with her husband Jeff — agreed to take the job, but she first went to seek permission from principal Pat Sheridan.

Sheridan OK’d the request and told Handley that “I’ll buy you a pair of tennis shoes and that will be your salary.”

What followed was worth its weight in tennis shoes a hundred fold. The Female Flyers looked all over the Tri-State and Ohio for games. And when they found other schools with basketball programs, they scheduled them and played.

The members of those 1970s teams were honored Saturday with a reunion held at the school with several former players attending and reminiscing about the glory days.

Handley coached the team for two years before she became pregnant and the search for a new coach began. Hannon turned to her uncle, B.J. Hannon, who said yes even though he was already coaching a boys’ grade school team.

“I would come home from Wilson’s (Sporting Goods) and eat and then go coach the boys’ team, and then go from there and coach the St. Joe girls’ team,” said Hannon.

“I had never coached a girls’ team before and the hardest thing was keeping myself from patting them on their butts like I would the boys.”

Because of their dominance, coach Hannon nicknamed the girls’ “The Fabulous Female Flyers.”

“I remember one game we were playing at Catlettsburg (Ky.) and when we came back out at halftime to warm up, they were going up the stairs and leaving. They just forfeited,” said Terri Hannon.

Coach Hannon said at the end of the first quarter the officials came to him and said the coach didn’t want to play anymore.

“Their coach said we were tough rough. We played a boys’ team,” said coach Hannon.

“Lavena would sit in the same spot and smoke the same number of cigarettes every game,” said Terri.

In Ohio’s first year of a girls’ state tournament, the Female Flyers reached the Class A regional finals but lost to Lancaster Fisher Catholic.

The key to the game was the very start. The officials lined the two teams up facing the wrong baskets. St. Joseph won the tip and ran its tip play and scored with an easy layup.

Since the shot was into the wrong basket, the points went to Fisher Catholic and they were given the ball. Coach Hannon argued —correctly so — that it was a correctable error and that it was an officials’ error. But the officials refused to correct their mistakes and left the Female Flyers flustered Flyers.

“We were all tore up and we never recovered,” said former player Sherri Malone.

Toledo held a girls’ preseason tournament a year prior to the state tournament and invited the top teams in Ohio. The Female Flyers were among the invitees and lost only to the tournament champion, a Class AAA school.

“I borrowed a van from the CAO to drive the girls and Father (Virgil) Reischman was going to lead us. We got on the highway and he was going about 35 miles an hour and I thought there was no way we’d ever get there at this rate, so I passed him. He gave me a dirty look, but we made a lot better time,” said coach Hannon with a laugh.

“Mary Ann had a real nice bank shot from the left side. I called Andrea ‘Tish’ because that was the sound her shots made going through the net,” said coach Hannon.

“All the girls were good basketball players, but they were also good athletes. We had real good softball teams, too.”

Deceased members who were remembered were Cindy Holmes, Barb Goldcamp and Rosie Schwab.

One of the team’s top players was All-Ohio point guard Sue Goldcamp who was unable to attend the reunion.

Goldcamp — one the finest female athletes to play in Lawrence County — is also an outstanding amateur golfer in West Virginia.

Goldcamp recently picked up her first West Virginia women’s Senior Amateur Championship this year by three strokes over 11-time champion Carolina Ramsey. Goldcamp has been among the top-ranked women’s amateur and senior amateur golfers in the state.

NOTE: St. Joseph was a member of the Ohio Valley Conference during the 1970s. The 1975-76 season was the first time Ohio had a state tournament for girls’ basketball.

It’s that most wonderful time of the year. And for some sports figures, it’s a welcome change from the rest... read more