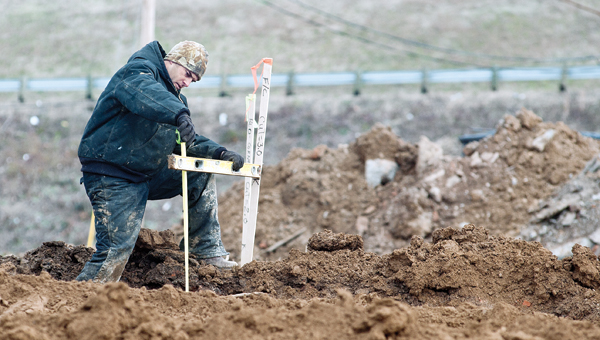 A worker from Mullins Construction measures for proper elevation for the storm drains on site of the future parking lot of Frisch’s Big Boy Thursday.

Turning a site off Ninth Street into a hotel and restaurant complex appears on target as some warm December weather has given the project a boost, according to Ralph Kline of the Ironton-Lawrence County Community Action Organization.

Right now John Mullins Construction of Wheelersburg is in the midst of finishing up installing storm sewers on the grounds that will become the Ninth Street Gateway Center.

The first segment of the Gateway project will be a Holiday Inn Express and Suites and a Frisch’s Big Boy restaurant.

Mullins is handling the preliminary site work and constructing the Frisch’s while MPH Hotels of St. Petersburg, Fla., will build the Holiday Inn. MPH has constructed more than 150 hotels across the country.

After storm sewers are completed, pouring the concrete slab for the hotel should be next, Kline said.

“You will see it coming out of the ground,” he said. “We are on target. We are staying there but you are always concerned about going into the winter season.”

Around the two structures is planned a common area.

“We have been checking around about landscape architects,” Kline said. “We probably will be in January working on landscaping plans and the signage.”

Faces firearms charges   A local attorney allegedly assaulted in a bar fight in July was recently indicted by... read more