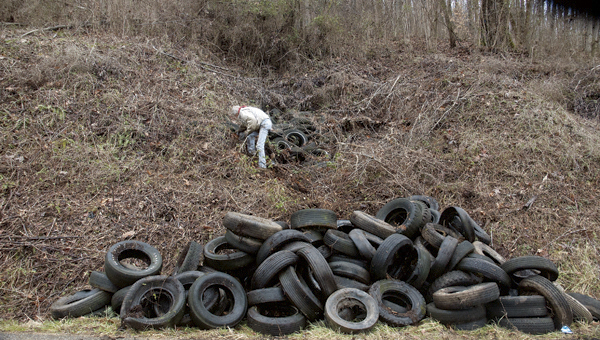 The LSSWMD coupled with the Ohio EPA cleaned up a dump site of more than 1,000 tires.

The illegal dumping of tires is one of Ohio’s biggest environmental issues and one that has been building for decades, says Dan Bergert of the Ohio EPA.

“This is a legacy problem,” Bergert said. “All across the state we see tires being dumped on roadsides or river banks. They accumulate over the years, over a couple different generations.”

Tires are not biodegradable, meaning they will not naturally decompose. Because of this tires can’t just be taken to landfills. Instead they must be properly disposed in a way they can be recycled and repurposed, but too often they are simply discarded Bergert said.

“I have been on probably a thousand of these cleanups,” Bergert said. “That’s millions of tires that have just been discarded. It’s a huge problem for the environment across our entire state.”

Discarded tires like the ones on Ben Howell Road. are a breeding ground for vector mosquitoes that carry diseases and viruses like malaria and West Nile. The tires also are a fire hazard as they burn easily.

“A few years ago in Wyandot County a bunch of dumped tires caught on fire,” said Dan Palmer of the LSSWMD. “That fire burned for two weeks.”

Organizations like the LSSWMD are constantly working with the Ohio EPA to put a stop to illegal dumping. In the mean time the organizations are working to clean up the waste.

“It’s a constant battle,” Bergert said. “We are making headway though as we’ve cleaned up most of the bigger dump sites. It’s a tiring job but our work is better when local organizations like the LSSWMD work in unison with ours.”

The Ohio EPA contracted Liberty Tire Recycling out of Columbus to assist with the cleanup. Tire cleanups like this one occur statewide and are paid for by a $1 tax on every new tire purchased in the state of Ohio.