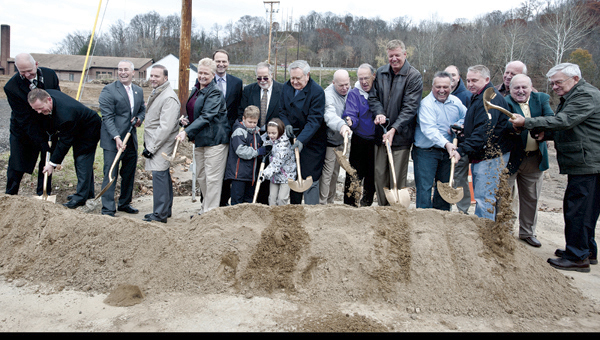 Today the year 2013 is a thing of the past but the progress that has come to county economic development leaders expect to grow and grow.

Yet it was also a year of sadness with the death of a long-time public servant and one of frustration as commuters to the county spent most of a hot summer too long behind the wheel of their cars as they struggled to get home each night thanks to a much used bridge that got whacked.

So to get the New Year going, The Tribune is keeping its tradition of choosing the top 10 stories of 2013.

Coming in at No. 1 is the groundbreaking for the Ninth Street Gateway Center project. On Nov. 20, bulldozers started work on what will be by summer of this year a Holiday Inn Express and Suites and Frisch’s Big Boy restaurant.

For years city and county leaders have pushed for a hotel in the City of Ironton with that desire seemingly a pipe dream. But now reality is only a few months away and symbolizes a new page in the economic progress of Ironton.

For that reason the Gateway Center takes top spot in the news.

At No. 2 is the long-running saga of a bridge and the motorists who wished it were going to get fixed soon. On May 17, a vehicle hit one of the vertical I-beams near the Ohio side of the Ben Williamson Bridge linking Coal Grove to Ashland, Ky.

At  first, the Kentucky Transportation Cabinet, who oversees maintenance of the Kentucky bridge, kept it open to traffic at a restricted weight limit. But within days, heavier truck traffic continued to go over it so cabinet shut the bridge down.

In June Dennis J. Smith, 59, of South Point, was cited by the Ohio State Highway Patrol in connection with the damage done to the bridge. He was charged with failure to control and leaving the scene of an accident, both misdemeanor charges. On Oct. 31 in the courtroom of Ironton Municipal Judge O. Clark Collins, Smith was fined $200 with court costs, sentenced to 180 days in the county jail with 120 days suspended and put on one-year probation.

It took until mid-August before contractors were able to get the bridge open again as a new beam had to be cast and then delicately remounted in place of the damaged metal.

Until then motorists coming from Coal Grove to Ashland had to use a single lane of the Simeon Willis Bridge that normally only carries traffic from Ashland into Ohio.

That meant getting home could take up to a half-hour depending on the time of day.

A summer-long investigation into allegations that local residents were victims of an alleged scam by the owners of a storm repair business based in Grayson, Ky., brought two indictments by the end of the year.

Leo Patrick Richard Jr., 39, and his wife, Carol Richard, 40, both of Manhattan, Ill., pleaded not guilty to more than 100 charges that included theft, theft from the elderly and money laundering.

A well-respected and longtime figure on the political and judicial scene died last year, drawing colleagues and friends to reflect on the life and career of former Lawrence County Prosecutor J.B. Collier Jr., who died on May 30.

Collier was elected to the first of the five four-year terms that he served as a prosecutor in November 1992. He retired in December 2012 to face a five-month battle with cancer.

“He taught me a lot of about what it means to be a great prosecutor,” Collier’s successor, Brigham Anderson, said at the time. “The key to being a prosecutor is making sure justice is served, whatever justice may be, and making sure the truth comes out in the proceeding. He was great at that and he taught me how to do that. He’ll be greatly missed.”

An alleged argument left one man dead, a second allegedly assaulted and another man awaiting trial for murder and felonious assault.

In February Rodney Delawder, 33, of 2953 State Route 243, Ironton, was charged with murder and second-degree felonious assault following the killing of his brother-in-law, John A. McKnight, 48, at their home in January.

According to law enforcement Delawder had allegedly been fighting with his two brothers-in-law at the time of the murder.

The focus of a high-profile murder case lost her bid for a third trial.

In May the Ohio Supreme Court denied Megan Goff’s appeal for a new trial just a month after the Ohio Fourth District Court of Appeals upheld her 2011 conviction for killing her husband, Bill Goff.

Bill Goff was found dead at his home in 2006 from multiple gunshot wounds. Goff was convicted the next year, but was granted an appeal for a new trial in 2011 based on the battered woman defense.

That trial ended in another conviction. She was sentenced to life in prison with the possibility of parole after 18 years. According to Prosecutor Brigham Anderson that ended Goff’s appeal process.

The clash between a long-running county cleanup agency and the organization that once managed it headed to court.

The Lawrence-Scioto Solid Waste Management District broke ties with the Ironton-Lawrence Community Action Organization that had operated it since the 1990s after the district had run into problems with the state Environmental Protection Agency.

After the break-up, the two agencies were in constant dispute over the ownership of the district’s assets including five vehicles and more than $300,000. A pre-trial that was originally scheduled for December has been set before Magistrate D.L. McWhorter later this month.

Another dispute that took on a life of its own was between the Lawrence County Agricultural Society and Jeff Simmons, the owner of Structure Steel, a Canton-based company originally hired to build a new fair barn and livestock arena in 2012.

Both sides sued each other over contractual disputes with the fair board seeking $525,000 in damages. The impending court battles forced the board to hire another contractor to erect the structure pushing the total cost of the project close to $700,000.

However, before either side could make its case in court, Simmons filed for Chapter 7 bankruptcy in April of 2013, postponing the trial indefinitely.

In a 4-3 vote Ironton City Council approved letting the use of the carts on city streets. The goal was to add another element to Ironton that would attract tourists.

The story of a man who camped out at the south end of Third Street for months turned into a tale with a happy ending for Michael Hampton, once homeless except for his tent in an empty field.

Four months later after public concern and intervention the 42-year-old man, who suffers from grand mal and petit mal seizures, found a home, works as a volunteer at a local food pantry and found a new life.

It remains unclear who will serve alongside Robert Burcham and Donald Rigney for the next four years as a Windsor... read more