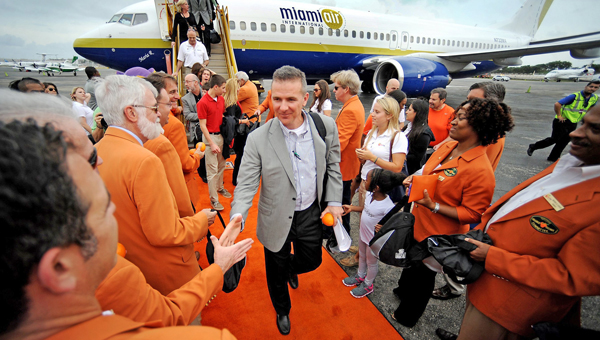 MIAMI GARDENS, Fla. (AP) — Ohio State’s Urban Meyer has never had any issue acclimating to the biggest stages in college football. Clemson’s Dabo Swinney is sounding like someone who’s getting comfortable under the brightest lights as well.

Swinney has taken his team to the BCS one other time, and lost by 37 points.

Of course, come Friday night, none of that will matter. The seventh-ranked Buckeyes (12-1) and the 12th-ranked Tigers (10-2) will be squaring off in the Orange Bowl, where Meyer will aim to keep his BCS record perfect and Swinney will try to have his team, as he put it, “continue to climb the mountain.”

“When you have an opportunity to come to a BCS ball game and lose it, you want to get back and have another opportunity,” Swinney said Thursday. “There’s only six teams, I think, in the country that have been in two BCS bowls the last three years, and we’re one of them. So it’s a great opportunity for us to have a chance to win one.”

Meyer would say the same thing. His team had visions of playing in Pasadena, Calif. for the BCS national championship next week, but the loss in the Big Ten title game — the first under Meyer in 25 games since he took over in Columbus — knocked the Buckeyes out of the title picture.

So instead, Ohio State headed to South Florida, where Meyer will look to add the Orange Bowl to his BCS collection that already includes two title-game wins and a Sugar Bowl victory while at Florida, and a Fiesta Bowl triumph from when he coached Utah.

Clemson lost the Orange Bowl two years ago to West Virginia, 70-33 — the game turning when the Tigers fumbled the ball away in the second quarter, on a play where they would have taken the lead. Instead, the floodgates opened.

“This team has more than responded,” Swinney said.

Here’s five things to watch in the Orange Bowl:

THE QB BATTLE: Tickets to the Orange Bowl aren’t inexpensive, but the shows that Clemson quarterback Tajh Boyd and Ohio State quarterback Braxton Miller can put on may make the admission price seem like a bargain. Boyd has accounted for 38 touchdowns this season; Miller has scored 32 with either his arm or his feet. It’s Boyd’s finale; it may be Miller’s as well if he elects to go pro, as some expect he may.

BUCKEYE D: If there’s a weakness on a team that’s 24-1 in the past two seasons, it may be Ohio State’s pass defense. Each of the Buckeyes’ last four opponents have completed at least 60 percent of their passes, throwing for 1,363 yards in that stretch. And with that side of the ball dealing with some injury concerns for the Orange Bowl, it’s clearly to Clemson’s advantage.

RUN (AND) HYDE: Ohio State RB Carlos Hyde has 1,408 yards in 10 games this season, and says he’d like to cap his college career by setting the Orange Bowl record for yards in a game. Hyde has averaged 7.7 yards per carry; Clemson’s defense has yielded 3.7 per attempt. Hyde is the first running back to top 1,000 yards under Meyer, and is 116 yards away from fifth all-time on Ohio State’s list.

WELCOME HOME: The Buckeyes and Tigers both recruit the Sunshine State heavily. Together, the teams have 13 players from the state, including six starters. Among the notables: Clemson WR Sammy Watkins (who may be playing his college finale), Clemson DB Jayron Kearse; Ohio State top tackler Ryan Shazier; Hyde, the Ohio State running back; and Ohio State DL Joey Bosa, who hails from Fort Lauderdale, Fla. and the powerhouse St. Thomas Aquinas program.

KICKERS: If the game comes down to a kick, odds are that either Clemson’s Chandler Catanzaro or Ohio State’s Drew Basil will deliver. Catanzaro has made all 56 of his extra-point tries and is 13 of 14 on field-goal attempts. Basil is 74 for 75 on extra-points and 9 for 10 on field goals.

Jim Walker jim.walker@irontontribune.com   SOUTH POINT — The South Point Lady Pointers seemed to have all the answers. Whenever St.... read more