Togetherness was key for 93-94 Ironton team 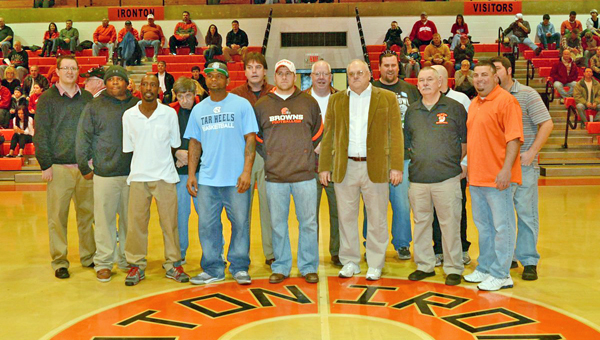 “Come together, right now, over me.” — John Lennon.

Maybe The Beatles’ song “Come Together” didn’t inspire the 1993-94 Ironton Fighting Tigers basketball team, but it certainly was a fitting title.

That team was honored Friday prior to the Ironton-Peebles game on the 20th anniversary as the first Ironton boys’ basketball team to reach the Final Four.

Ironton was 8-9 heading into the sectional tournament against a tough schedule and coming off a state championship game run in football.

Ironton had eight members of the football team on the basketball team.

Then coach Phil Rice waited patiently for his team to come together against a tough schedule.

“We really started coming together right at tournament time. We were playing Minford and Minford was pretty good and we beat the heck out of them. The game wasn’t as close as the score,” said Rice.

“I was at a district coaches’ meeting and I told some of the coaches we’ve got a shot. And they said, ‘Yeah, we know you’re a lot better.’ And I said, ‘No, a shot to the state. That’s how good I think we’re playing right now.’ I think that thought I was about half crazy because our record wasn’t that good.”

But the tournament trail saw Ironton beat favored Minford 78-71 and then rout Northwest 77-57. In the district, Ironton beat 19-2 Washington Court House 63-62 and Gallipolis 59-53.

“We played Washington Court House and they were a terrific team and we had them down 21 or 22 points at one time. We missed some free throws at the end and let them back in it,” said Rice.

“Gallipolis was our hardest game. The way coach (Jim) Osborne played was tough to play against and they had a big man and that made it tough for us.”

The regional tournament saw Ironton beat Steubenville 75-645 and Columbus St. Charles 76-52. The tournament run ended with a 65-62 loss to Wauseon in the state semifinals.

“Our games easiest games were the regionals. Steubenville was ranked No. 1 in the state and favored to win the championship. And St. Charles went to the state from our region the year before and they were trying to repeat and we had them down 20, 25 points,” said Rice.

Ironton had a deep lineup. Travis Wylie played the point guard, Marq Davis was the shooting guard and 6-foot-3 center Damon Pringle was an outstanding player inside.

Pringle was a second team pick on the AP team.

“We had nine or 10 guys making that tournament run who were pretty good and these guys were just so tough. It just all came together at once. I could see it coming,” said Rice.

“They all played their roles and they all liked each other. The atmosphere was perfect. You could see. They guys who couldn’t shoot knew they couldn’t shoot very well and they would pass it to the guys who could put it in the basket. They were all very unselfish. Mark (White) was tough inside. Troy (Sands) was good inside. We just rotated guys around.”

Ironton has returned to the Final Four twice, as state runners-up in 2004-05 and last season before losing 61-60 in overtime to eventual state champion Ottawa-Glandorf.

Rice understands how talent and luck go hand-in-hand when trying to reach the state tournament.

“It’s so hard to get to the state tournament. To achieve that with 200 and some schools is really tough. And only one team is going to win it. We’ve had some really good teams that never made it. I’m proud of this team for breaking down the door and letting our other teams realize they can make it,” said Rice.

Meyer: Orange Bowl loss will sting for long while