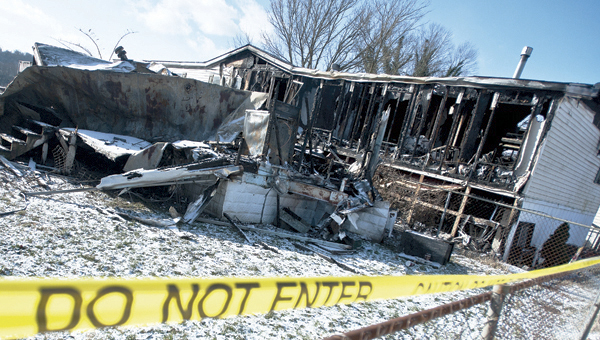 The Kitts Hill Fire was the second to hit Lawrence County this week. This fire on Front Street in Proctorville occurred on Sunday morning.

Lawrence County emergency dispatchers said that the fire departments of Aid, Decatur and Lawrence townships responded to a call reporting a structure fire at approximately 3:30 a.m. on Tuesday. The departments later confirmed the fire to dispatchers while also reporting that two occupants of the home were transported to area hospitals.

The Ohio State Fire Marshal was called to investigate the blaze.

“This is an ongoing investigation,” said Michael Duchesne, assistant director of communications for the fire marshal’s office. “The cause of the fire is undetermined, but we can’t rule out a portable heater.”

The fire in Kitts Hill was the second house fire this week. The first happened on the 400 block of Front Street in Proctorville on Sunday morning and claimed the life of Beth McDaniel. She was 47.

“You do tend to see a rise in home fires during this time of the year,” Runyon said. “People are looking for ways to stay warm by using auxiliary heaters that can sometimes be unsafe.”

“It may seem obvious but when using those portable heaters you need to have a clear area of at least three feet,” Mahlmeister said. “Don’t leave anything flammable in front of them. Also if you’re using kerosene heaters, don’t try to fill them up with gasoline. We’ve seen that happen and it can be dangerous.”

Subzero temperatures can wreak havoc on water lines even with proper preparation. According to City of Ironton Water Works Superintendent... read more