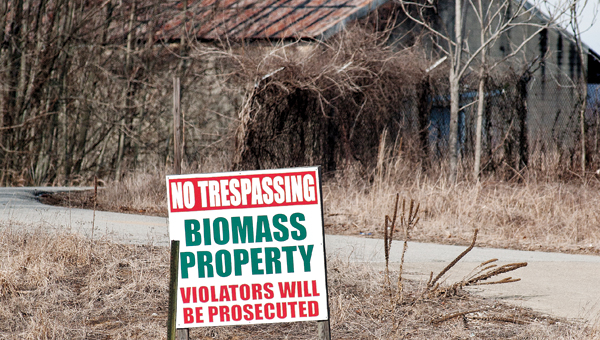 Biomass acreage is located next to The Point.

SOUTH POINT — Delinquent acreage next to The Point industrial park could go on the auction block this year.

“I have sent a couple of letters to them and attempted to contact them prior to foreclosure,” Anderson said. “(A sale) could be in the next six months.”

The foreclosure complaint is expected to be filed shortly. The delay came because the acreage is under two separate names — Biomass LLC and South Point Biomass LLC.

There are three segments of acreage owned by Biomass that are contiguous to The Point totaling approximately 77 acres. Taxes are delinquent on all parcels. However the foreclosure is targeting acreage that has $30,171.05 in taxes and penalties owed for the past three years. The amount owed on the other two segments totals $2,574.13 in taxes and penalties.

In a foreclosure the prosecutor files a lawsuit naming other lien holders and eventually the property goes to a sheriff’s sale. The auction would start at two-thirds of the appraised value of the property as determined by the sheriff.

Although the Biomass acreage lies next to The Point, Dr. Bill Dingus, Lawrence Economic Development Corporation executive director, has said he did not know if the LEDC would bid on the property if it went to a sheriff’s sale. That decision would have to come from the LEDC board.

Anderson said the action against Biomass is a concerted effort by the county to collect taxes. Delinquencies hurt the county school districts and the general fund and all taxpayers have the obligation to pay, the prosecutor said.

As part of the Ironton-Russell Bridge replacement project, contractors for the Ohio Department of Transportation will close Campbell Avenue... read more