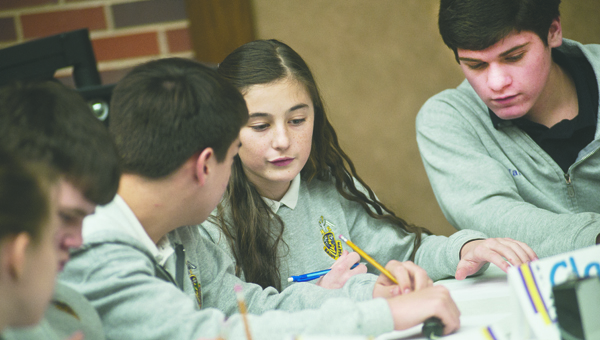 On Friday the Bowman Auditorium at Ohio University Southern was home to the Lawrence County Middle School Quiz Bowl Tournament.

It felt more like the NCAA tourney and that’s because it had all the makings of March Madness. The tournament featured a heavy favorite, a defending champion looking to repeat and a Cinderella squad hoping to play spoiler.

Fairland entered the tournament having not lost a quiz bowl match during the regular season. The Dragons got off to a predictable start dispatching South Point 60-46 in the tournament’s first game. In Fairland’s next match they met up with Symmes Valley who came wearing glass slippers. The Vikings took the game into overtime before Ian McCleese hit what amounted to a buzzer-beater to hand Fairland its first loss of the double elimination tournament.

“It was the very last question of the match,” McCleese said. “Whoever got it was going to win. I hadn’t answered a single question that whole game but I knew I was going to answer that one.”

The win pitted Symmes Valley against defending champion St. Joseph who had just dispatched both Ironton and Chesapeake by double digits. The Vikings kept it close, but St. Joseph managed a 56-50 win to send Symmes Valley to the losers’ bracket.

“That was a tough one,” said St. Joseph student, Ethan Sheridan. “They (Symmes Valley) had just beat Fairland so we knew it was going to be close.”

In the losers’ bracket the Dragons had rebounded putting together back-to-back wins to eliminate Dawson-Bryant and Chesapeake from the competition. That set up a rematch with the Vikings for a chance to face the Flyers for the championship.

This time no overtime would be needed as Symmes Valley took a 53-47 decision eliminating the tournament favorite.

“I couldn’t believe we beat them,” Garret Roberts, of Symmes Valley, said. “They were the best team all year and we were able to knock them off.”

Coming out of the loser’s bracket meant that the Vikings had to beat St. Joseph in back to back matches to claim the title. Symmes Valley completed the first half of that task by claiming a 51-44 victory to force the decisive game.

In the winner take-all finale the Flyers surged out to a double-digit lead. But, as the Vikings had shown all day, they weren’t going to go away easy. They mounted a comeback by dominating the final round and forced overtime. Tied at 48, five questions would decide the match and the tournament. Fittingly, it came down to the very last one. Both teams frantically rushed to push their buzzer first, but the Flyers beat out the Vikings by a fraction of a second. Symmes Valley was left holding its collective breath as St. Joseph gave its answer. It was correct and the clock finally hit midnight on the Vikings as the Flyers celebrated their second straight LCMSQB tournament title.

“That was tense,” said Roberts following the loss. “I’m proud of how we did though, I was happy once we beat Fairland.”

On the other side amidst the jubilation of victory, another feeling was emerging.

“Relief,” St. Joseph student Ryan Scaife said. “I’m relieved. That was crazy, it was so close. I was already proud of how we played but I did want that repeat.”

“We’re the Miami Heat of quiz bowls,” added an excited Isaac Whaley. “It feels awesome to win two in a row.”

Domestic violence, forgery and theft were some of the charges to come before Lawrence County Common Pleas Judge D. Scott... read more