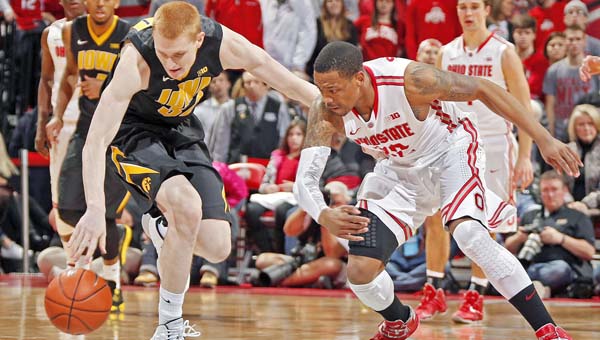 Ohio State Buckeyes guard Lenzelle Smith Jr. (32) can’t come up with the steal against Iowa Hawkeyes forward Aaron White (30) during the 2nd half of their game at Value City Arena in Columbus on Sunday. The Buckeyes lost to Iowa, their second straight game. (MCT Direct Photo)

Matta approached him and said, “Hey, my man. This isn’t going to be the only time in your career you’re at a low point. Trust me. It happens. That’s the reality for me when I’ve been coaching as long as I have.

“The thing we’re trying to find is, how do we get back to playing our consistent — our best — basketball?”

Matta has been preaching this week that the Buckeyes shouldn’t — and can’t afford to — dwell on the defeats. After all, it seems there’s always another major Big Ten test right around the corner.

Matta, Loving and the rest of the Buckeyes are trying to pick themselves up off the mat. Whether or not they have been successful in pushing away the negatives will likely determine the outcome of their game at Minnesota (13-4, 2-2 Big Ten) on Thursday night.

Judging from the mood of the players, Matta’s upbeat approach is apparently getting through.

“We were all down at first. We were pretty upset by the way we’ve been playing lately,” point guard Shannon Scott said. “But we’re starting to get back our winner’s mentality now. We’re all positive. We all know what we have to do to be successful again, so we’re sticking with that and we’re going to try to move on from there.”

After climbing to No. 3 in the nation, the Buckeyes fought back from a 17-point deficit at No. 5 Michigan State before falling in overtime 72-68 on Jan. 7. Then they blew a nine-point second half lead in losing at home to No. 20 Iowa 84-74 on Sunday.

Now the 11th-ranked Buckeyes (15-2, 2-2) are trying to answer a lot of questions — and doubts — when they step on the court at dark and drafty Williams Arena.

One of the big messages Matta has discussed is that this isn’t new ground for an Ohio State team.

Just two years ago, the Buckeyes lost three out of five games in one stretch in February — two of them at home — yet still rebounded to go 31-8 and make it to the Final Four.

Last season, they followed a similar scenario. They lost two in a row to ranked opponents, then two games later were routed at Wisconsin, 71-49. But that team reeled off wins in its next 11 games to capture the Big Ten tournament championship and come within a narrow loss to Wichita State of making it to the Final Four once again.

“The last two years we did a good job of getting back to doing what we do,” said junior sixth man Sam Thompson. “We weren’t really ourselves this past week on the court. So we want to make a point to play our game in Minnesota — to make sure we’re mentally ready to come out and play 40 minutes of Ohio State basketball.”

Ohio State has won the last six meetings with the Golden Gophers of first-year coach Richard Pitino, the son of the legendary Louisville coach, Rick Pitino.

The Buckeyes, averaging just over 10 turnovers a game over their winning streak, totaled 38 in the defeats. They’ve spent extra time working to avoid those errors in practice this week, in addition to preventing defensive lapses.

They’ll have more than 100 hours to get over the most recent loss.

“We definitely don’t think it’s the end of the world,” Thompson said. “We don’t like losing. But there’s always a chance for improving.”

MINNEAPOLIS (AP) — Mike Zimmer is finally a head coach in the NFL. The Minnesota Vikings think now is the... read more