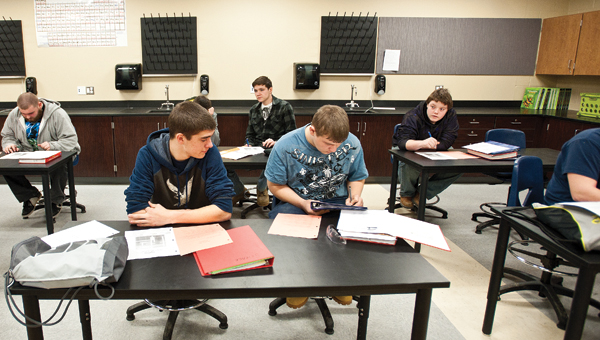 Students study in one of the science labs.

The renovations to Collins Career Center are nearly complete and students have returned to the Getaway campus.

The renovations included a complete overhaul of the building’s interior as well as updating much of the equipment and technology at the school.

“We’ve moved into the modern era,” said CCC director of secondary education, Jim Howard. “Everything is state of the art, to make sure the kids are working with the most updated equipment.”

Before the renovations classrooms at the school were small and cramped Howard said. Now each classroom has been expanded to 900 square feet to better accommodate the roughly 500 students who attend CCC.

“We completely gutted the building, down to the bare walls,” Howard said. “Our classrooms were kind of small. We’ve made them all bigger increasing the size by about 300 square feet.”

While the renovations were taking place, CCC students attended class in the old South Point High School building. Currently, many of the adult-education students are still taking classes at the old SPHS location. Howard says he hopes all of that will change by the first of February.

“We aren’t completely finished with all our renovations,” Howard said. “One of the main things we are still working on is the adult-education building. We are hoping to have it ready for those students to return to the main campus by the beginning of next month.”

In total the renovations cost $25 million which was largely paid for with a grant from the Ohio Schools Facility Commission. However, taxpayers in Lawrence County did have to pick up around 25 percent of the final price tag through a levy.

“It was money well spent,” Howard said. “There was about $6 million dollars we still needed and the taxpayers agreed to pick that up for us. The residents of the county really stepped up and made this happen.”

Money diverted from general fund until paid off   The reason the Village of Coal Grove owes the Ohio Public... read more