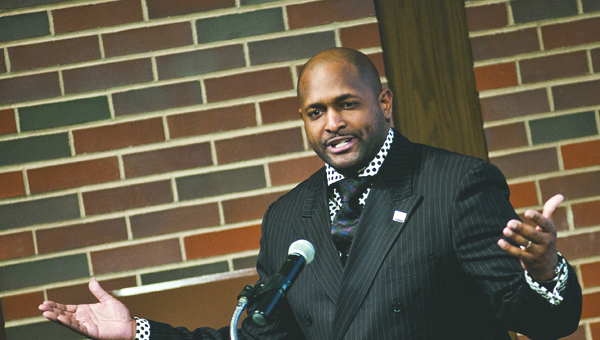 The Rev. James Stowe, with the Quinn Chapel AME Church, speaks to the audience.

It has been 45 years since Dr. Martin Luther King Jr. was assassinated on a Memphis hotel balcony. Although his life ended that day, his legacy is as strong as ever.

“I’m glad to see so many young people here this evening,” Dr. Charles Jarrett, sociology professor at OUS, said. “The older folks in here can reflect on what King’s work has meant, but it’s up to you, the young people, to carry it on.”

“When I was first asked to do this, I thought to myself what could a white Methodist preacher from northwest Ohio possibly have to say,” he said. “But, after much prayer, it came to me. Dr. Martin Luther King Jr.’s legacy isn’t a black legacy or a white legacy, it’s a human legacy.”

Dotts read from the Book of John and professed that hatred puts people into “spiritual blindness” and said “We can’t love our God, but hate our brother.”

“Hatred destroys us from the inside out,” he said. “When we hate others, we are consumed and bound by it.”

“We are here tonight celebrating a great man with a revolutionary dream,” Swindler said. “The dream is a seed that can grow into the future of your choosing.”

Audio of King’s “Love and Power” speech was played while a large still photograph was projected onto a screen before pastor of Quinn Chapel AME Church the Rev. James Stowe gave an emotional recital of Nikki Giovanni’s “In the Spirit of Martin.”

OUS student Michelle Dotts sang “Hands” by Jewel before King’s speech commonly known as “Street Sweeper” was broadcast. The speech, given by King at Chicago’s New Covenant Baptist Church in April 1967, gained renown for it’s parable, “If a man is called to be a street sweeper, he should sweep streets even as a Michelangelo painted, or Beethoven composed music or Shakespeare wrote poetry. He should sweep streets so well that all the hosts of heaven and earth will pause to say, ‘Here lived a great street sweeper who did his job well.’”

OUS assistant professor of communication studies Dr. Purba Das spoke about the significance of King’s policy of non violence and his trip to India in 1959 to visit Mohandas Ghandi, who is widely considered the protagonist of nonviolent protests.

“Ghandi taught King that it was possible to fight for the rights of black people without guns and bombs, lies or propaganda,” Das said, “but with love and respect.”

A clip of Marian Anderson singing from the steps of the Lincoln Memorial in Washington, D.C., for a crowd of 75,000 people was shown because of its significance in the civil rights timeline. The Daughters of the American Revolution prior had rejected a performance by Anderson. As the video clip of Anderson singing “My Country Tis of Thee” began, it suddenly stopped and Russell (Ky.) High School student Isaac Stephens completed the song on saxophone.

Kristen Martin and Leah Branch performed an interpretive dance to Sam Cooke’s “A Change is Gonna Come” before OUS Interim Dean Dr. Dan Evans thanked all those who attended, participated in and made the event possible. Evans particularly thanked OUS Director of Enrollment and Student Services Robert Pleasant and the university’s electronic media department.

“It is the singers, speakers and dancers that made this program what it is,” Evans said. “The talent is so impressive.”

With a video clip of King’s “I Have a Dream” speech during the 1963 March on Washington for Jobs and Freedom and the event culminated with the IHS Varsity Singers’ rendition of “We Live the Dream.”

Refreshments were served when the event concluded.

Back in October Gunnery Sgt. Robert Hahn was assigned to be the lead recruiter in the Tri-State area for the... read more