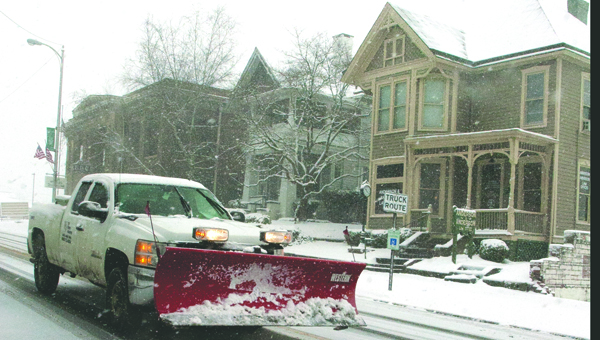 A truck with a snowplow attached makes its way through Ironton on Tuesday.

The Level 1 snow emergency that Lawrence County was under on Tuesday was lifted this morning.

On Tuesday morning Lawrence County Sheriff Jeff Lawless had issued a Level 2 emergency, but scaled that down by the afternoon to Level 1, which remained in effect through the night.

“We only had one accident overnight,” Lawrence County Sheriff Jeff Lawless said about county roads. “Most people heeded the advice to stay off the roads.”

The snow that hit the Tri-State at 5 a.m. Tuesday basically ended that afternoon. Crews had gotten to clear most of the major roadways, but below freezing temperatures hit, causing ice to cover some roadways.

A Level 2 snow emergency means the roadways are hazardous with blowing and drifting snow.

As of 11 a.m. Tuesday there were at least four accidents law enforcement was responding to including one in Coal Grove and a second on County Road 412 in Proctorville.

None of the accidents reportedly had serious injuries.

County road crews started at 6 a.m. salting and sanding the 10 routes for which the county engineer’s office is responsible. They were back out for a second round until 8 p.m. Tuesday.

In snow emergencies the engineer and highway superintendent follow behind the road crews to determine if the mix of salt and sand is working.

“Once it gets below 20 degrees salt will not work,” he said. “There is not a lot we can do, except clear off the road.”

Clearing roadways, however, can leave a layer of ice salt will not affect, which is what happened overnight.

Early this morning county crews were back at work.

“We are already out treating roads and sunshine and the temperatures will be our friend today to activate the salt,” Cade said. “Most of our roads were fairly clear except for spotty locations in shady areas.”

“We were prepared for it, salting roads to take care of them, scraping and salting and getting the main throughways and overpasses,” Ironton Mayor Rich Blankenship said.

There are only 39 private police forces in Ohio, but they are far more “private” under state law than they... read more