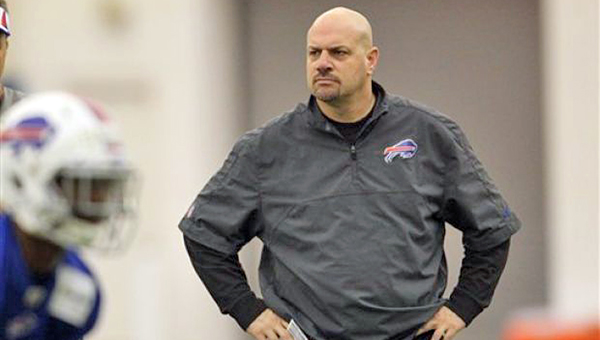 CLEVELAND (AP) — Mike Pettine got a second look from the Browns, who could be zeroing in on their next coach.

Buffalo’s defensive coordinator had his second interview with Cleveland owner Jimmy Haslam and CEO Joe Banner on Tuesday night, a person familiar with the Browns’ plans told The Associated Press. The meeting took place in Mobile, Ala., site of the Senior Bowl, said the person who spoke on condition of anonymity because the team is not commenting during its search.

Pettine is the first candidate to meet twice with the Browns. He spent four hours with Haslam, Banner and other members of Cleveland’s front office but was not offered the job. Pettine had impressed the Browns during his first interview last week, and club officials flew to meet with him again — a strong sign of their interest.

However, the person familiar with the team’s plans said the Browns left Mobile and had another interview lined up for Wednesday.

The Browns are in the fourth week of their search for their seventh full-time coach since 1999.

Pettine just completed his first year with the Bills, and he improved the team’s defense in every statistical category. Though the Bills still struggled against the run, they finished second in the NFL with a franchise-record 57 sacks.

The 47-year-old Pettine spent four seasons as a defensive coordinator under Rex Ryan with the New York Jets before joining the Bills. Pettine also has worked as an assistant in Baltimore.

Earlier, Adam Gase, Denver’s highly regarded offensive coordinator, called Haslam and informed him he was withdrawing his name and would not interview after the Super Bowl.

The 35-year-old Gase, who will lead the Broncos’ high-powered offense against Seattle, was the first candidate contacted by the Browns after they fired Rob Chudzinski following a 4-12 season. Gase declined an initial interview request because he wanted to concentrate on the playoffs, and the Browns would have had to wait until after Feb. 2 to speak with him.

Haslam said last week the team is “prepared to wait as long as necessary” to hire a coach, and the Browns quickly moved ahead without Gase, who enjoys his role with the Broncos and may not be ready for a head coaching gig.

The Browns are the only team without a head coach and have interviewed at least eight known candidates — the list is still growing — to become their fourth coach in the past six years.

Besides Pettine, the team has set up a second interview with Seattle defensive coordinator Dan Quinn.

The 43-year-old Quinn, who presided over the NFL’s top-rated defense this season, met with the Browns on Jan. 1. Per NFL rules, the Browns can conduct a second interview with Quinn by Sunday, but are not permitted to offer him a job until after the Seahawks’ season is over.

Gase drew the Browns’ attention and soared up their wish list of candidates after helping quarterback Peyton Manning shatter several league records this season. Also, Haslam received a glowing recommendation on Gase from Manning, who has a long-standing relationship with the Haslam family because of their Tennessee ties.

Gase, too, fit the outline — young, offensive-minded — of the type of coach Banner wanted to bring to the Browns, who have lost at least 11 games in each of the past six seasons.

Gase is the second high-profile coach to remove his name from consideration. New England offensive coordinator Josh McDaniels also told the Browns he was not interested in pursuing their opening.

The Browns also have interviewed former Tennessee coach Mike Munchak and Dallas special teams coordinator Rich Bisaccia, and both be brought back for second meetings.

San Francisco coach Jim Harbaugh said he has been contacted by the Browns about members of his staff. Cleveland may want to interview defensive line coach Jim Tomsula or offensive coordinator Greg Roman.

Harbaugh would not confirm which coaches Cleveland asked about and was reluctant to offer much information.

“To go into any further detail, I don’t think helps our situation, their situation,” he said. “Their search is their search.”

Goodell wants to give extra point the boot