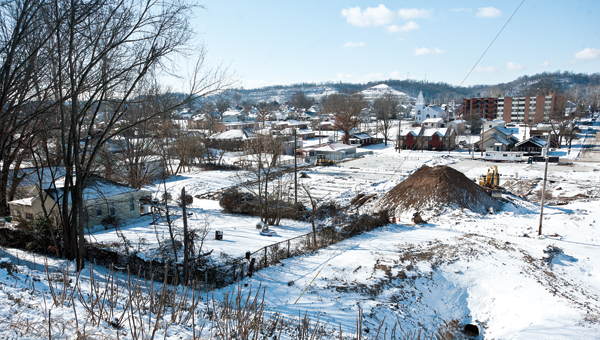 An overview of the future hotel and restaurant site from the on ramp of U.S. 52.

Despite the current arctic blast hitting the Tri-State, work continues on the Ninth Street Gateway Center.

Grading work was going on Wednesday in the midst of subfreezing temperatures.

“Site work continues to go on with a lot of underground utilities, sewer hookups, and conduits,” Ralph Kline of the Ironton-Lawrence County Community Action Organization, said. “There is some of the retaining wall going into place.”

The first segment of the Gateway project will be a Holiday Inn Express and Suites and a Frisch’s Big Boy.

John Mullins Construction of Wheelersburg is in charge of site work and construction of the Big Boy, which will start after the hotel is built.

The Holiday Inn will be built by MPH Hotels of St. Petersburg, Fla. MPH has constructed more than 150 hotels in the United States.

The next step is pouring the concrete slab for the hotel.

“From there it will be bringing in materials, raising the steel and it coming out of the ground,” Kline. “It is progressing along on schedule.”

Ironton High School was one of two Lawrence County Schools to earn the distinction of “School of Promise” in 2013.... read more