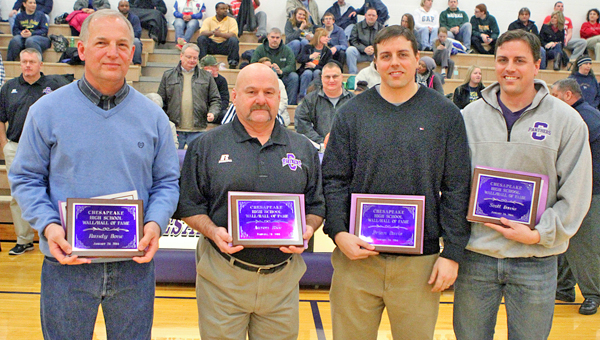 Chesapeake High School inducted the 2014 Class into their Athletic Hall of Fame on Friday. This year’s members are, from left to right, Randy Bone, Aaron Rice, Brian Davis and Scott Davis. (Courtesy Tim Gearhart of Tim’s News & Novelties in Ironton)

CHESAPEAKE — The newest foursome was welcomed into the fold Friday when Chesapeake High School inducted the 2014 Class of their Athletic Hall of Fame.

Bone was a standout fullback for the 1975 Ohio Valley Conference championship team, the school’s first in 14 years.

Rice was a standout in football, wrestling and baseball. He was second team all-district in Class AA in football and honorable mention All-Ohio.

Rice was also a league champion in his weight class in wrestling and was an outstanding infielder on the baseball team. He started at Marshall University as a freshman was on the 1981 Herd team that won the Southern Conference championship, the last time Marshall has won a league title in baseball.

Rice is currently a teacher coach at Chesapeake.

The Davis brothers — sons of the Panthers’ Hall of Fame football coach Phil Davis — were three sports standouts in football, wrestling and track.

Both were first team All-Ohio, first team All-Southeast District in Division IV and special mention All-Ohio. They were conference champions in wrestling.

YPSILANTI, Mich. (AP) — Javarez Willis hit a game-winning 3-pointer with 28 seconds to play as Ohio rallied for a... read more