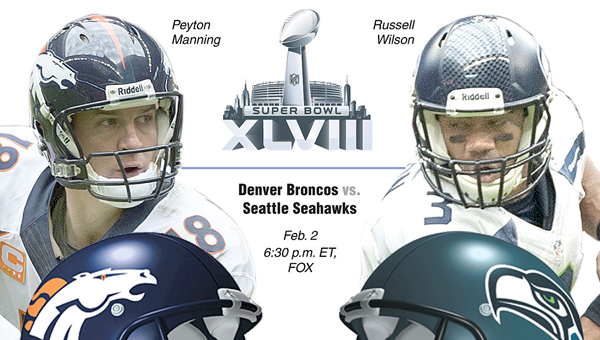 Coaches who actually smile, are quotable and think football should be fun.

And the two best teams in the NFL.

Sunday’s Super Bowl has just about everything a fan, a player, a coach — and certainly a league — could ask for.

“It’s very special to be here,” Seahawks coach Pete Carroll said. “Look at this event that our players are having to take part of. The game, the matchup, the culmination of the season, all of this is just extraordinary.”

Carroll is correct about the special nature of this Super Bowl. It could have a profound effect on the immediate future of pro football, too.

Whether it becomes a referendum on hosting the big game in the elements in a cold-weather city is unknown. But more possible is it having a strong bearing on the future of the quarterback position in a sport that has become ever more dependent on the passer.

In other words, we have the classic pocket passer emblematic of the old guard — that would be Peyton Manning, of course, and no quarterback has ever had a more prolific season.

And we have the quick-footed, quick-witted scrambler in Russell Wilson representing for the millennials such as Robert Griffin III, Colin Kaepernick, Cam Newton, even Andrew Luck.

Seattle’s miserly defense wants to force Manning into uncomfortable territory, which basically means anywhere outside the passing pocket. Denver’s D will be intent on giving Wilson a taste of claustrophobia by keeping him hemmed in the pocket.

Obviously, both QB approaches work for their offenses, or else these two teams wouldn’t each be 15-3, top seeds in their conferences and facing off for the championship. The quarterback differences — aside from age, time of service in the pros, or even their height (Manning at 6-foot-5 is about 6 inches taller than Wilson) — make this Super Bowl even more intriguing.

It’s all in the styles.

“They both have different styles,” Broncos offensive coordinator Adam Gase said in perhaps the biggest understatement during a week of hyperbole. “But mentally it sounds like Russell’s kind of heading in that direction of what Peyton’s done with his career as far as being a very intelligent quarterback and using the tools of his game to his advantage.”

But they are entirely different tools, and the question becomes which set of tools will fit the NFL best if it continues to evolve into a light-up-the-scoreboard game?

There will always be a place in anyone’s starting lineup for a Peyton Manning, who is in the conversation for greatest quarterback in history regardless of whether he adds a second Super Bowl ring on Sunday. Teams will simply construct their offense around a talent like that.

Whether most teams will stick with convention or choose the route the colleges — the NFL’s farm system — have gone, building around mobile, creative and elusive passers such as Wilson, won’t be decided by who wins at the Meadowlands. But it could play a significant role in a copycat league.

The evaluation systems won’t change no matter what species of quarterback is prevalent in the pros.

“As a talent evaluator for college and even free agency, the toughest thing to evaluate is process,” Broncos quarterbacks coach Greg Knapp said. “Can the guy process in the pocket during the heat of battle?”

Everyone knows Manning has had that skill throughout his career, and Wilson has provided strong evidence in his two NFL seasons that he’s got it, too.

“Peyton might be one of the best I’ve ever been around that can process, ‘Ok, I’ve got these tools to use, and in 10 seconds I’ve got to make a decision, and execute in less than four,”’ Knapp added.

Wilson’s multi-faceted abilities on the field might differ in method to Manning’s, but Carroll sees many similarities off the field.

“He’s an incredible competitor in every way,” Carroll said of his quarterback, who at 25 is 12 years younger than Manning. “In preparation, in game day, he’s the epitome of what you want in your competitor. He’s got tremendous work habits. He’s got extraordinary athleticism. He’s got a general all-around savvy that allows him to make great decisions under pressure.

“He’s extremely confident, too, so no matter what is going on, he’s not going to waver in his focus and ability to handle things.”

Manning believes elements of all styles will always be in demand.

After the laughter stopped, Manning continued:

“I could take a piece of everyone, of some of my favorite quarterbacks, and I could take 30 traits from different guys, and put them in that perfect quarterback.”

But will that perfect QB in years to come feature more of Manning and his mold or of Wilson and his ilk?

Sunday’s game could provide a glimpse into that future.

Pointers tighten up lead in OVC

Jim Walker jim.walker@irontontribune.com   PEDRO — The South Point Pointers have to play their way to win. Friday night they... read more