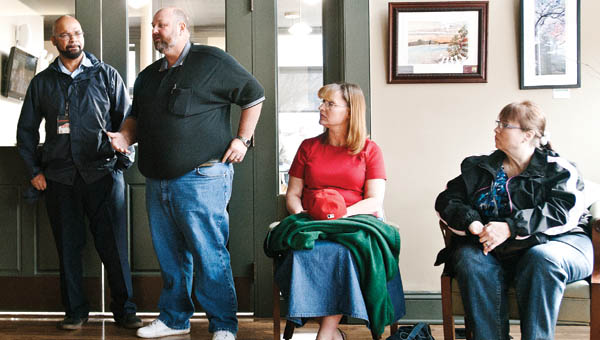 Concerned citizens wait for an opportunity to speak at the transit hearing Friday.

“The TTA has been running this and doing a phenomenal job,” Mike Payne, director of public transportation for the Lawrence County Port Authority, said. “These proposals increase the frequency of what we have been doing.”

The proposed routes would consist of three morning runs and three afternoon runs.

Route 11 to Huntington, W.Va., and Proctorville-Rome would now make its first stop at South Point Walmart, and then go to the Transit Café, Ashland, Ky., Depot and Ceredo Plaza before returning to the TTA Center in Huntington. Route 12 from Huntington to downtown Ironton through South Point would now make its first stop at Ceredo Plaza before stops in Ashland, Ironton and South Point Walmart. Finally, Route 13 that runs through downtown Ironton to Ironton Hills Plaza would now begin in Huntington and make stops at the Chesapeake Community Center, Rome Township, St. Mary’s Medical Center and Marshall University, respectively.

TTA General Manager Paul Davis said the change in routes is necessary to obtain funding and the meeting’s intention was to get public input.

“This new service can’t resemble the old service because of the grant money,” he said. “We are trying to hold on to this bus service and, to speak frankly, we have a problem when it comes to public funding; there’s no local levy in place to support this service. We are using this opportunity to not only get funded but improve the service.”

The grant is allocated under the Congestion Mitigation and Air Quality (CMAQ) program.

TTA Operations Manager Jeff Heinl went over the proposed fixed-route changes, maps of which were on display and Payne offered an explanation for the changes.

“Before (Lawrence Co. Transit) can fulfill the routes TTA doesn’t, we have to know where TTA is going to go,” Payne said. “We know where the demand is because we know everyone who comes through the Ironton Center.”

Ironton resident Francis Sherman — who was one of 15 residents in attendance — has been utilizing the public transit system since it began and suggested a route be planned from Solida Road in South Point to County Road 1 and then to Commerce Drive.

“Based on where I’ve ridden the bus,” Sherman said, “it will work.”

Payne said one reason behind the proposed routes is to attract employees and students to utilize the service.

“All the buses will have Wi-Fi and bicycle transport,” he said. “The hour and a half it takes to get from Ironton to Huntington would be about 25 minutes after the route changes.”

Service changes are scheduled to be implemented on Monday, March 3.

Cruisers getting prepped for getting out on the roadways

Five cruisers are seen in the parking lot area beside the Lawrence County Jail. The vehicles are in need of... read more