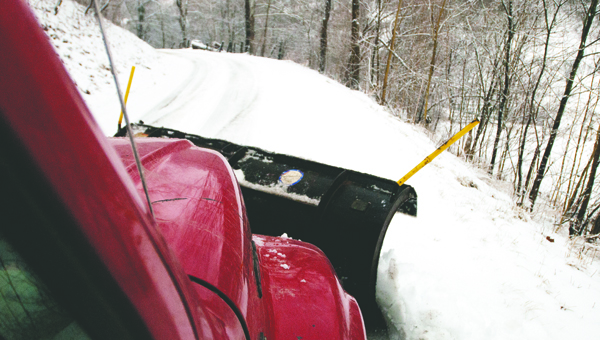 While most people avoid driving in hazardous conditions, employees of the Lawrence County Road Department strap on boots and head out the door.

“It looks really bad and driving is dangerous but because it’s wet and heavy it’s an easy type of snow to plow,” Don Wilson, road department superintendent, said. “It takes each man seven or eight hours to do his entire route.”

Eleven four-ton trucks — each equipped with a nearly two-ton plow in the front and 10 or so tons of a salt and grit mix in the back — take to the 380 miles of county roads well before daylight to make commuters’ drives as safe as possible. The fleet also includes two graders.

Each driver has a dedicated route of nearly 40 miles, but total distance traveled doubles when taken into account routes have to be driven twice so both sides are treated.

“Drivers start with the most traveled road of their routes and work toward the least traveled,” Wilson said. “We don’t have the manpower or money to work around the clock. Some state crews were out at 10 p.m. last night and the roads they treated looked like they hadn’t been touched this morning. We wait until the snow dies down, hit the roads hard and get them cleared.

11:50 a.m. — Deering resident Jay Jenkins finishes his lunch and prepares to depart the county garage to clear the least-traveled and most treacherous road on his route. This trip is the seven-year road department employee’s fourth of the day.

“It’s pretty, but that’s about it,” Jenkins said about snow as he guided his modified International dump truck through the center of Coal Grove. “I’d like to have one, maybe two snows a year and then I’m good with it.”

12:01 p.m. — Jenkins, 48, takes the good with the bad when doing snow removal. He turned onto the narrow, curvy, up-and-down County Road 55 and lowered his plow.

“This kind of snow just peels right up,” he said. “The temperature being right at freezing makes it easier, too.”

The warmer temperatures, Jenkins said, aid the road-clearing process because salt is still effective and the grit, composed of crushed limestone, helps vehicles get traction even if the road re-freezes.

“We use about one ton of salt for every three tons of grit,” he said. “We used to use sand for the grit but it was so fine it didn’t really help much. The limestone does much better.”

“This is where it gets fun,” he said jokingly. “There are only three houses from here to the end of the road, which is a few miles from here. One guy used to get to the top of the hill back there and turn around because this road is so rough and curvy and there are only the three houses. But the way I see it, those people pay taxes just like anybody else so I scrape it. That’s just the way I feel about it.”

“How long it takes depends on two things,” he said, “traffic and visibility.”

12:43 p.m. — Only one vehicle had been encountered so far as Jenkins turned his truck around and headed back down County Road 55 to clear the other side. As he approached a steep, snow-covered hairpin curve he recalled why he dislikes this portion of the trip.

“I got stuck here a few years back,” he said. “The truck just wouldn’t make the turn and I slid into the ditch. They had to get a grader to come and pull me out.”

Jenkins said traffic, not getting stuck in a ditch, is the most frustrating part of the snow removal process.

“People getting right behind the truck and not letting me work is the worst part,” he said. “Most of the time they’ll stay back or go around when they get the chance. But there’s always one or two who stay right behind me.”

12:56 p.m. — Multiple attempts to negotiate the hairpin curve on the backside of County Road 55 failed. Jenkins begins the long and slow process of descending back down the hill for nearly a mile — in reverse. He had no plans of returning the truck to the ditch.

“We’re going to have to go back around the other way to scrape the other side,” Jenkins said. “It’s the long way, but I’ve got to do it.”

1:22 p.m. — Jenkins pulls the green-handled lever in the cab of his truck that lifts and drops the plow and begins his second trip down County Road 55. A 15-foot high “rooster tail” of snow, ice and mud shoots out from the side of the plow leaving physical evidence Jenkins has made his run.

1:27 p.m. — Jenkins again approaches the hairpin curve that rerouted him on his previous trip.

“The way the curve is angled and the weight of the truck with the plow really messes up the way the tires make contact with the road,” he said. “But we scraped twice now, so we shouldn’t have a problem this time.”

The truck begins the ascension and slides sparsely at the original spot that thwarted progress and keeps moving. Then, it hits a brick wall.

“I really hope we don’t have to back off of here again,” he said.

Jenkins began raising and lowering the plow to distribute weight and regain traction. Just as quickly as it stopped, after about 30 seconds, the truck’s tires grab the pavement and it begins moving forward.

“We won’t have any more problems,” Jenkins said. “From here on it’s smooth sailing.”

“Now I’m going to go back over all my routes and make sure they are OK,” he said. “It’s just something I like to do.”

A “Pennies for Patients” fundraiser at Rock Hill schools will last another week because of multiple winter weather-related delays and... read more