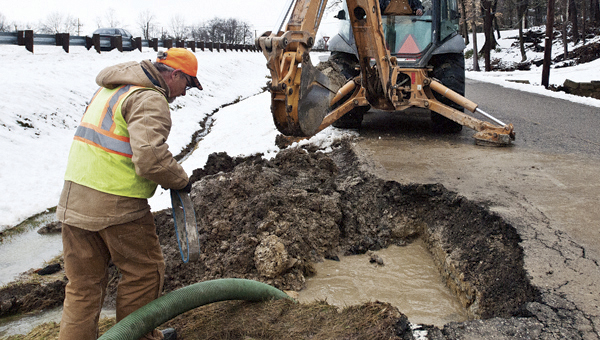 THE TRIBUNE/JESSICA ST JAMES
Tim Malone, left, and Joe Johnson, right, with the City of Ironton have been working almost nonstop as they battle broken water lines in the city.

Residents had to wait a bit for their garbage to be picked up and were asked to conserve water as more leaks and breaks occurred in the city’s pipes Tuesday night. Ironton Mayor Rich Blankenship on Wednesday temporarily transferred all sanitation department workers to the water department in an ongoing effort to battle water leaks and keep residents’ water working.

“By combining crews we were able to repair four major leaks around the city,” Blankenship, said. “After fixing those breaks the water level in our tanks immediately started to rise.”

Breaks at Indian Hills, Kemp Lane, North Third and Elm streets, and 7 1/2 Alley on Walnut Street were all repaired by 7:30 p.m. Wednesday.

“Water is more important than garbage at this point,” Blankenship said. ““We did the right thing. The sanitation employees will resume garbage collection Thursday unless another major issue occurs. This is the first time in six years I have had to combine crews. I’m doing all I can with resources that are available.”

“The city doesn’t have the money to replace this infrastructure,” Blankenship said. “There are loans available, but we can’t pay back the loans.”

Boil water advisories have been issued for the Zenith Heights and Indian Hills areas because water was shut off completely during the repair.

“Who knows what might happen overnight,” Blankenship said. “We are keeping our fingers crossed.”

The Village of Coal Grove is also experiencing water woes. An uprooted tree near Zoar Baptist Church broke a water line sometime Tuesday night and a boil water advisory has been issued as a result.

“Anytime we have a break we issue a boil water advisory as a precaution,” Larry McDaniel, Coal Grove Mayor, said. “We usually keep the advisory in effect for three of four days. We have the water tested and when it comes back OK, we lift the advisory.”

The break was fixed early Wednesday morning. Water to 800 customers in Coal Grove was shut off while the break was being repaired.

SOUTH POINT — The Ohio State Fire Marshal is asking for information about the fire that destroyed Spaulding’s Floor and... read more