Price settles in as Reds get set to open camp 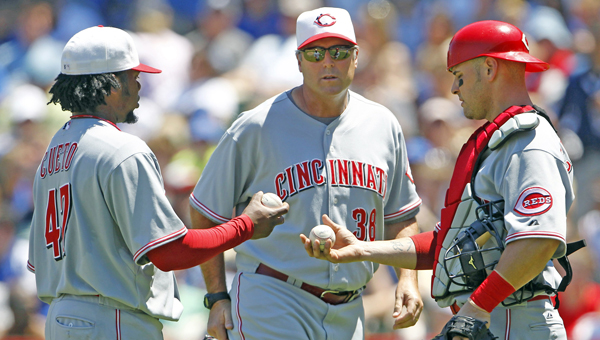 GOODYEAR, Ariz. (AP) — Bryan Price sat down in the cushy chair. In front of him was a desk. Behind him, two lockers of his very own. The first-time Cincinnati Reds manager felt a little out of place in his own office.

Time to start getting used to it.

The Reds open spring training on Friday when pitchers and catchers report and have their first workout. Price will be front-and-center, a new role for the former pitching coach who took over when Dusty Baker was fired after another playoff disappointment.

“I told the guys in our (staff) meeting, ‘You better make sure you come in here and keep me company,”’ Price said on Thursday afternoon. “I’m not used to being in a room by myself, unless I’m in the doghouse. Been there a few times.”

And he will be again once the games begin and one of his moves backfires. Ask Baker about that one.

Baker got fired after leading the Reds to the playoffs for the third time in four years. They lost to Pittsburgh in the wild card game, the third time they were knocked out in the opening round. The postseason fizzle cost Baker his job and gave Price the chance to manage a team with plenty of talent to contend.

He knows the team will be judged not on whether it reaches the playoffs, but whether it wins when it gets there. Just like the Bengals, who have lost their opening playoff game each of the last three seasons, the Reds aren’t going to get a final grade until well after the regular season has ended.

Price isn’t going to dwell on it with his players.

“For me, the references — if any — will be very short in discussing the past,” he said. “There’s nothing we can do about it. I’ve inherited a phenomenal group of guys that really want to play this game beyond where we’ve been.”

The Reds are in good shape as they get started.

The pitching staff is mostly healthy. Reliever Jonathan Broxton had surgery to repair a tear in his forearm last August and has been making good progress in his throwing program during the offseason. He’s the only one who may not be fully ready for opening day.

“He’s stayed constant in his throwing progress, which is terrific,” Price said. “And we definitely anticipate him being on the mound this month. If that’s enough time to get him ready for the season, we’ll see. We’ll probably have a lot better answer when we get into those last 10 days of March.”

Right-hander Johnny Cueto has fully recovered from strained muscles in his right side that bothered him most of last season. Cueto wound up on the disabled list three times, limiting him to 11 starts.

“That being said, you’re talking about a guy who ended the season healthy and there shouldn’t be any impediments to his spring training based on last year,” Price said. “We can hit the ground running without any inhibitions.”

Left-hander Tony Cingrani has recovered from back spasms that limited him during his rookie season. Cingrani moves into the spot that opened when Bronson Arroyo left as a free agent, signing with Arizona.

The Reds keep in touch with players in the offseason to monitor their health. So far, the reports on all of them are encouraging, although the club will know for sure when they take physicals on Friday before the first workout.

“So it’s probably an easier question to answer once we get through physicals tomorrow, but I’m optimistic we’ll be in good health,” Price said.

NOTES: Price is curious whether the bad weather on the East Coast will interfere with players’ travel. He said four club officials who were expected for a staff meeting on Thursday couldn’t make it because their flights were canceled. … The position players report next Wednesday for physicals and the first full-squad workout. The Reds open their spring training schedule against the Indians on Feb. 26.

CINCINNATI (AP) — Five things to know about the Cincinnati Reds as they start spring training camp:

PRICE IN CHARGE: Manager Dusty Baker led the Reds to three playoff appearances in four seasons, but Cincinnati couldn’t get past the first round. The front office decided to make a change, elevating pitching coach Bryan Price. He has never managed, so it’ll be his initiation to being the guy on the spot. Every move will be watched and compared for the first few months. One potential change: Price is thinking about using closer Aroldis Chapman for more than one inning. Baker limited him to one inning because the hard-throwing left-hander needs a lot of time to get warmed up and uses a lot of pitches to get outs.

CLEANING UP: Perhaps the biggest question for the Reds is whether cleanup hitter Ryan Ludwick can return to form. He tore up his right shoulder while sliding into base on opening day and didn’t return until mid-August. The shoulder still bothered him, and he batted only .240 with two homers and 12 RBIs in 38 games. The Reds need Ludwick, who turns 36 this season, to provide a right-handed threat in their lefty-dominated lineup. If his power is still missing, the Reds will be susceptible to left-handed pitchers, especially late in games.

RUN, BILLY, RUN: Speedy Billy Hamilton will get a lot of attention. Shin-Soo Choo left as a free agent after one of the best seasons by a leadoff hitter. The 23-year-old Hamilton made quite a splash during his September promotion, batting .368 and stealing 13 bases in 14 tries. He’ll move into Choo’s spot atop the lineup and play center field, a position he’s still learning after one season at Triple-A. There are questions about whether he’s ready to handle major league pitching on an everyday basis after batting .256 at Louisville last season. “We’re all excited about the development of Billy Hamilton,” Price said. They’re already selling “Run Billy Run” shirts in Cincinnati.

CINGRANI’S SPOT: Right-hander Bronson Arroyo was a fixture in the rotation for the last eight years, counted on for 200 innings per season — he signed with Arizona this week. Left-hander Tony Cingrani moves into the open spot in the rotation. As a rookie, he went 7-4 with a 2.92 ERA and 120 strikeouts in 104 2-3 innings, but missed time because of back spasms. His deceptive delivery helps his fastball, but Cingrani needs to work on his other pitches and stay healthy.

AND WHAT ABOUT CUETO?: Johnny Cueto couldn’t stay healthy last season, raising questions about the durability of the Reds’ most dominant starting pitcher. He had to leave the opening playoff game against San Francisco in 2012 with a pulled muscle in his right side. He made three trips to the disabled list last season, limiting him to 11 starts. He was good when healthy, going 5-2 with a 2.82 ERA, but strained muscles near his pitching shoulder kept acting up. The Reds are hoping their ace hasn’t turned fragile.

Lady Vikings fall to No. 1 Eastern in sectional finals

Jim Walker jim.walker@irontontribune.com   ROCKSPRINGS — So that’s why they’re ranked No. 1 in the poll and listed as one... read more