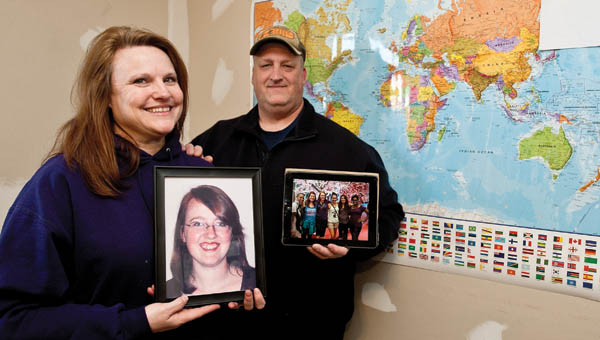 Ironton residents Laura and Ron Kettle hold photographs of their daughter Stephanie who is currently serving on a mission trip.

It will only be for 10 days, but that week and a half in April will be the first time Laura and Ron Kettle of Ironton will have seen their daughter in the past six months.

But that reunion won’t be a time of sightseeing and relaxation.

“We will be doing hands-on mission work in Romania,” Laura Kettle said. “They told us ‘This is not a vacation. You will have your hands in mission work.’ ”

Then the Ironton couple will have a greater understanding of what their daughter, Stephanie, has being doing for the past six months.

In August Stephanie, with the support of her family’s church, First Baptist of Ironton, started an around-the-world mission trip where she will work in the field in 11 countries in 11 months, starting in China and ending in Africa.

“She felt God was calling her to the mission field and tried a couple of years ago,” her mother said.

However when that door didn’t open right away, Stephanie thought that she was directed to go college. Then, her efforts to navigate the bureaucracy of university admissions also fell through. That’s when she realized mission work was where she was supposed to be.

“Every month she learns something new,” Laura said. “It is about God, not her. What is her purpose and why God makes her do what He does. She has grown a lot.”

Some months Stephanie works in orphanages and others she meets face to face those forced into human trafficking.

“Some places people sell their children to orphanages,” Laura said. “She has had her eyes opened.”

Having a daughter so far away in countries where day-to-day life can be fraught with hazards could be a frightening experience for some parents. But for the Kettles, they exercise their faith.

“I think that when God asks you to do something, He will take care of you,” Laura said. “It goes back to my husband, Ron, who worked at the police department and now the fire department. I have been taught that you can’t worry.”

To pay for their trip to meet their daughter in Romania, the Kettles are organizing their own fundraiser — a red-eye bus trip to New York City.

“Our church has sponsored Stephanie so well, I hate to go to them for more money,” Laura said.

The bus trip will run from March 27 to March 29 and costs $130. Those going will spend about a day in New York plus about two days worth of travel time. The couple needs $4,000 to cover their overseas travel expenses.

As with everything Laura looks to her faith to sustain her.

“God gives you the strength and the ability,” she said.

The Getaway Community Church is hosting a spaghetti dinner on March 1 with proceeds from the dinner going to Brenda... read more