Harvest for the Hungry honors its volunteers 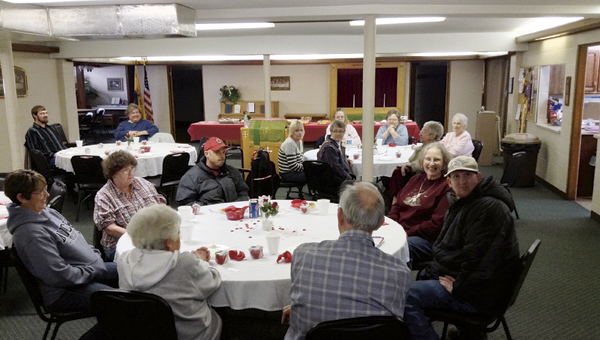 There may not be a more fitting way to show appreciation to food pantry volunteers than by offering free food, and that’s exactly what Harvest for the Hungry did on Monday.

More than 20 volunteers gathered in the First United Methodist Church’s fellowship hall and were treated to a free dinner catered by Stoker Bar-B-Que, which is located inside Tipton’s Market on State Route 93.

“We’ve had several dinners in the past but this is the first one since we moved to our new building,” Diane Porter, manager of Harvest for the Hungry, said. “I thought it would be nice to feed everyone since they do so much for us.”

The food pantry moved into its current building in September 2012 and before that time operated out of the basement of First United Methodist Church. Several churches of nearly every denomination donate and are involved with Harvest for the Hungry, which opened in 1992.

“If we didn’t want to volunteer then we wouldn’t,” Theresa Kline, who is one of many representatives of the Catholic denomination who volunteer, said. “I’m happy to be here.”

Volunteer David Sullivan has been helping at the pantry for six years.

“I love working at the food pantry and helping these ladies out,” he said. “They treat me like family.”

Porter said a sharp increase in the number of people served in January has all but depleted the pantry’s stockpile and donations and contributions are desperately needed.

“Generally there is a dip in the number of people we serve in January,” she said. “But this January we served 2,400 people because of the snow and freezing temperatures. Last year we served 500 people in January.”

The pantry will partner with Stoker Bar-B-Que again next month for a fundraiser to benefit families in need. Beginning March 1, which is National Pig Day, Stoker’s will begin taking orders for barbeque at a special $10 per pound price. For every pound sold, Harvest for the Hungry will receive $1.

Details of the fundraiser are still being organized and will be announced upon completion.