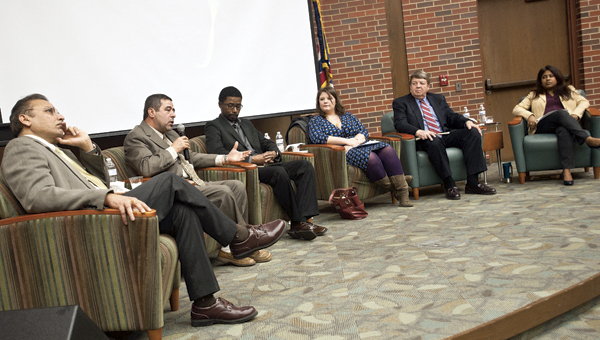 A Muslim, Jew, Christian and Hindu each took a seat on the stage in the Bowman Auditorium at Ohio University Southern on Tuesday to discuss the differences and similarities of their respective religions.

The discussion was deemed “InterFaith Dialogue: Finding our Common Ground” and its goal was to bring together communities and promote understanding and cooperation among people with different faiths through communication.

B’Nai Sholom is the only Jewish congregation in the area, White said, and three others have dissolved in recent years. She has been a Jewish educator for eight years and began her discussion by stating Judaism is a monotheistic religion based on the Old Testament.

“The Torah creates Jewish law,” White said, “but there are other texts used within our religion.”

The Zohar, White said, is the base text of Jewish mysticism, more commonly known as Kabbalah, a form of Jewish thought popularized in America by pop star Madonna.

“When it comes to Jewish thought, there are several sects within the United States,” White said. “All of the sects have different ideas but all share the traditional Jewish belief that people are good, no one is perfect but everyone should strive to be.”

Sneed spoke about some similarities between Judaism and Christianity, such as Abraham being considered a lead figure in the foundation of both religions, along with some basic Christian beliefs.

“Christianity is monotheistic but we believe in the Trinity,” Sneed said. “God exists in three persons — the Father, the Son and the Holy Ghost.”

Christians are born into sin, Sneed said, and wholeheartedly believe and trust the only way to get to heaven is through faith in Jesus Christ.

“One of the biggest misconceptions people have about Christians is that we are bigots, prejudiced and intolerant,” Sneed said. “There are extremists in Christianity just as there are in any other religion, but we preach a message of love, not of hate, bigotry or intolerance.”

Khader represented Islam on the panel and said Muslims have endured widespread misconceptions, especially since 9/11.

“We are a peaceful religion and we worship God,” Khader said. “Muhammad is a prophet who carries the message of God.”

There are three mainline rituals Muslims must perform, Khader said, which are prayer five times a day, one month of fasting per year, more commonly known as Ramadan, and alms giving.

“Children and pregnant women are not required to observe Ramadan,” Khader said. “The alms giving is from the rich to the poor; it is a sign of kindness.”

Islam has strong ties to other monotheistic religions such as Christianity and Judaism, Khader said. It requires them to believe in Scriptures and the Bible, including the Old Testament.

Valluri, an Indian-born Hindu, began his discussion of the lone polytheistic religion represented on the panel with a short history of India in regard to world religions.

“India is very diverse religion-wise,” he said. “It has some of the world’s oldest Christian churches and Jewish synagogues and has the world’s third-largest Muslim population and is the birthplace of Buddhism.”

At more than 5,000 years old Hindu is the world’s oldest religion, Valluri said, and it was formed from both Aryan and Dravidian beliefs.

“Hindus can worship many gods, one god or no gods,” Valluri said. “Most believe our main god, Brahma, can take the form of many gods. Brahma is not an object of prayer, but of meditation and knowledge.”

Hindus believe a person’s Atman, or soul inside, lives on after the individual in which it exist dies. Valluri used the analogy that the Atman is electricity and the human body an appliance by which it is powered.

“Hindus do not believe people are born sinners,” Valluri said. “We believe in universal brotherhood and reverence for everyone.”

Ahimsa is the Hindu belief and practice of nonviolence; Mahatma Gandhi used Ahimsa to drive the British out of India after 200 years of British rule.

Valluri went on to discuss the Hindu law of Karma, freedom of thought and Dharma.

The panel concluded the discussion after taking questions from the audience.