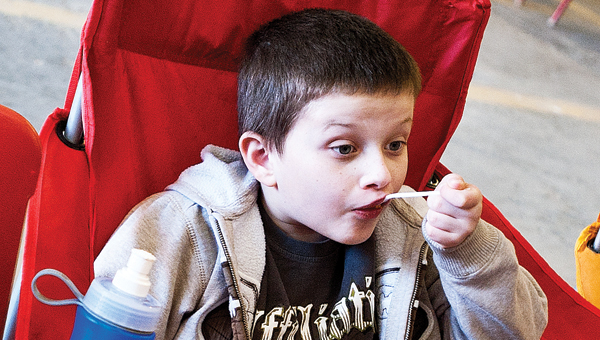 HECLA — It was utopia for chili lovers at Upper Township Fire Department on Saturday during its second-annual chili cook-off.

More than 15 chili recipes could be sampled for either a donation of $2 or $1 and a nonperishable food item. More than 10 vendors also had displays at the event.

Air Evac was selling memberships at the event and a portion of money from those sales was donated to the Upper Township Volunteer Fire Department. Air Evac’s helicopter was also on display.

Campbell Chapel’s Backpack Buddies program was another vendor at the event and was giving away free apples and bread to patrons.

“We are just trying to promote health and make the community aware we are here,” Jodie Hunt, program director, said.

Money raised from the cook-off will be used for equipment the department needs to buy periodically, J.D. Pancake, Upper Township Fire Chief, said.

“We have our levy on the ballot this year and we just want to show the community how much we appreciate them,” Pancake said. “The community is and has been very supportive of us.”

The department receives around $60,000 a year from two levies, Upper Township Fiscal Officer Tyler Walters said, and most of that is spent on workers’ compensation and insurance.

“The department depends on fundraisers like these to buy the equipment and gear they need throughout the year,” Walters said. “Luckily we have been really good at getting grants that help, too.”

Canned food donated at the cook-off was given to the Backpack Buddies program at Campbell Chapel.

Pancake was pleased with the turnout and plans to continue the event annually.

Over the past several months, The Tribune staff has worked diligently to craft our 2014 Profile edition. Due to a... read more