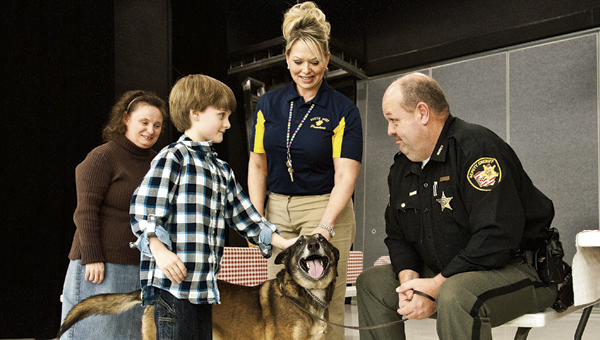 Teachers often try to bring to life the lessons they are teaching to students. Burlington Elementary reading teacher Lori Donahue was able to do that for her third graders on Friday.

“The students have been reading Aero and Officer Mike: Police Partners,” Donahue said. “I try to do a lot of contextual learning so I thought it would be great to bring in a K-9 team from here in Lawrence County. We want to make things more real for the children.”

Lawrence County Sheriff Deputy Scott Wilson brought his partner Hemi, a Belgian Malinois, to the school to give the students a firsthand look. Wilson demonstrated the work that real police dogs do and illustrated their importance in law enforcement.

“The book was pretty accurate,” Wilson said. “Aero and Hemi have a lot of similarities. Although, because we take Hemi into schools we don’t use him for apprehension, we want to keep him kind of passive. His role is just to seek out and search out drugs.”

Hemi has a sense of smell 1,000 times greater than that of humans and has been trained to sniff out five different types of illicit drugs.

“He knows the exact scent of marijuana, cocaine, heroin, crack and meth,” Wilson said. “His nose can process several things at once. If I took Hemi into a pizza shop he wouldn’t smell just pizza. He’d smell the pepperoni, the cheese, the boxes. He’d smell it all as separate smells at the same time.”

Hemi is as much of a police officer as anyone else on the force with his own badge and identification number. Wilson also says that he has a deep bond with his canine partner that was forged almost instantly.

“When you put in to work with the K-9 units they pair you with a dog,” Wilson said. “Hemi and I bonded quickly. If we wouldn’t have I’d been paired with another dog, but he’s my partner and my friend.”

Dogs, like Hemi, are selected based on their drive to hunt, and their ability to take commands. Wilson and Hemi have been paired together for the past four years and have confiscated drugs throughout the county.

“I can give Hemi commands in Dutch, English and hand signals,” Wilson said. “His training started when he was 11 months old. Since we’ve been together you’d be surprised by the amount of drugs we’ve found in schools.”

Drug education is another reason why Donahue wanted to bring Wilson and Hemi in.

“It’s very important to help educate the kids about drugs,” Donahue said. “If you can reach them while they are young, you may be able to prevent them from having issues with drugs in their futures.”

Providing future teacher-leaders with an experience that will span both rural and urban cultures and prepare students for their roles... read more