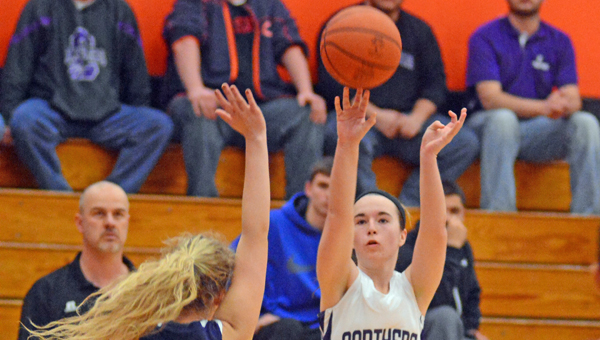 WAVERLY — There was an episode of the underwater cartoon character Spongebob when he “lost his identity.”

The Chesapeake Lady Panthers lost their identity for a period of time and found themselves drowning in a sea of 3-point attempts.

The Wellston Lady Golden Rockets were swimming in 3-point goals as they made eight long-range shots and beat the Lady Panthers 54-36 Monday in the Division III district semifinals.

Chesapeake came into the game having made only 21 3-pointers all season. But when Wellston hit four 3-pointers in the second quarter and rallied to take a 29-15 lead, the Lady Panthers got caught up in the moment and started shooting 3-pointers.

They made just one.

“It came down to the second quarter. They went to that zone and we got flustered and we got down too deep,” said Chesapeake coach Chris Ball.

“We’ve not won a game on 3-point shots. That’s what I told them. We’re not going to win this one on 3-pointers. So when we came back out (for the third quarter), I told them to be more patient, run our stuff, get it inside and it’ll open the outside up. And we did for a quarter.”

Chesapeake came out the third quarter and outscored Wellston 13-3. A layup by Sydnee Hall and a 15-footer at the buzzer by Kaylee Curry got the Lady Panthers within 32-28.

“At halftime we came in under control. We said, ‘Listen, we have two quarters to get this lead back. We’ve got plenty of time,’” said Ball.

Chesapeake’s Atiya Spaulding made a foul shot to cut the deficit to 40-34 with 3:52 left. But on the Lady Panthers’ next three possessions, Humphreys had two steals and Amber Gilliland another as Wellston went on a 6-0 run capped by Humphrey’s trey to lead 46-34 with 2:04 play.

“We came back out and I give my girls credit. They played extremely hard. We got back in the game and had a chance and that’s all you can ask for. They hit a few more shots and those steals kind of sealed it for them,” said Ball.

“Give the Humphreys girl credit. She’s pretty good. I thought the fourth quarter she took over, especially in transition and we couldn’t do anything with her.”

Hopkins finished with 22 points and 10 rebounds, Humphreys scored 19 and Chelsea McManaway had nine points and 12 rebounds for Wellston (10-12).

A key to the game was rebounding. Wellston grabbed 45 rebounds — 21 on the offensive end — to 31 for Chesapeake.

“Coming in we didn’t think they were as good as Oak Hill but we knew they were bigger,” said Ball. “Early in the game Spaulding got in some foul trouble and we sat her down and had to bring her back in. I felt that her going out took away some of our height, obviously.”

Chesapeake jumped out to an 8-0 lead before Wellston closed the gap to 10-7 at the end of the first quarter.

The Lady Panthers were making their fourth district appearance but failed to register their first win beyond sectional play. Chesapeake loses only one senior — Taylor Martin — and Ball hopes the experience will benefit the team next season.