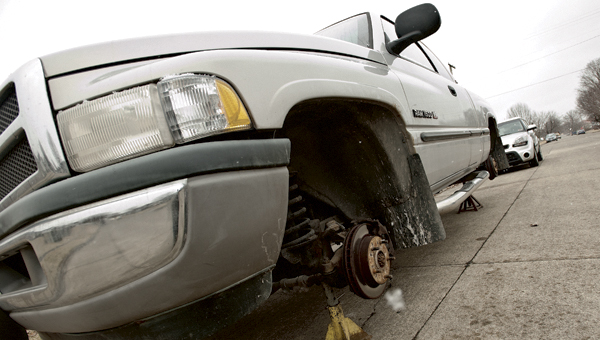 THE TRIBUNE/JESSICA ST JAMES
A truck, owned by Buddy and Marci Kleinman of Ironton, needs to have two tires replaced. Vehicles up and down the 2700 blocks on 10th and 11th streets were the object of tire slashing vandalism early Monday morning.

Residents of South 10th, 11th and Latonia streets in Ironton woke up to a criminal case to go along with their “case of the Mondays.”

That’s because early Monday morning a vandal slashed the tires on 18 different vehicles, doing thousands of dollars worth of damage in the process.

“We woke up and the police were out here and all of our tires were flat,” said Marcy Kleinman, who lives in the 2700 block of South 10th Street. “All four tires on both our vehicles were slashed. It’s going to cost us about $1,000 to replace all eight of them.”

James Stowe The Rev. of Quinn Chapel AME church said the events of Monday may not be an isolated incident.

Stowe, who lives on Eighth Street, said since the incident he has been uncomfortable.

“Just always trying to check on the property to make sure nothing is being vandalized,” he said. “After hearing about this you worry that it could escalate into something more serious.”

Mike Haas who owns and operates Charlie’s Tire Sales on South Third Street said this isn’t the first time he has seen a mass tire slashing in Ironton.

“We replaced 31 tires on Monday and 21 more on Tuesday,” Haas said. “But back 15 or 20 years ago down on North Fifth Street by the underpass there was a person who got a whole row of cars. That one was every bit as extensive as this one.”

The incident has left residents of the area confused on why someone would slash so many tires. The vandal seemed to act without discretion hitting almost every car parked along the three streets.

“Several of our neighbors had their tires cut,” Kleinman said. “It’s like they just went up the street and got every car that wasn’t parked inside a garage. I just don’t understand what the point of it is.”

Haas believes that the vandal may have kept knifing tires had it not been for an injury sustained during the act.

“One of the cars had blood on it and around it,” Haas said. “Like whoever was doing it must have hurt themselves in the process. I think he would have got more cars if it weren’t for the injury. The car with the blood was the last one in the sequence.”

Ironton Police Chief Dan Johnson confirmed that blood was found on the scene. He also said his detectives are working a promising lead.

“We did find blood and DNA was taken,” Johnson said. “We’ve sent that off to the lab for testing. When we get that back, we’ll test it against that of our suspect. But, until then we have a promising lead that we’ll continue to work on.”

In response to Monday morning’s vandalism, the Ironton Citizens Watch has scheduled a new meeting. That meeting is set to begin at 6 p.m. tonight and will take place at 2709 S. Ninth St., just one street over from where many of the tire slashings occurred.

Cincinnati reliever Alfredo Simon will take a turn in the starting rotation temporarily to fill the spot left open due... read more