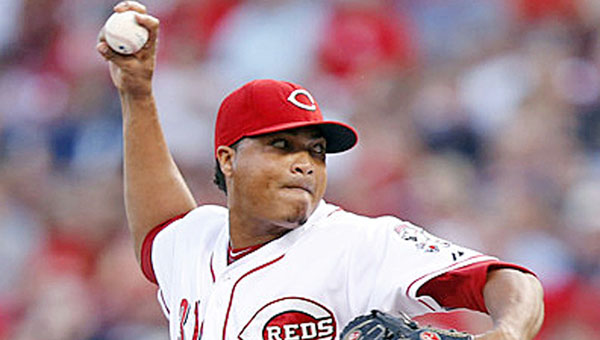 Cincinnati reliever Alfredo Simon will take a turn in the starting rotation temporarily to fill the spot left open due to an injury to Mat Latos. (MCT Direct Photos)

GOODYEAR, Ariz. (AP) — Alfredo Simon has spent most of his major league career as a reliever.

He’s going to get a chance to be a starter for the Cincinnati Reds at the start of spring training.

Mat Latos has been slowed by knee surgery, so manager Bryan Price has decided to use Simon as a starter during spring training. The idea is to get him ready to pitch more innings in case he’s needed when the season begins.

Latos had minor surgery to repair torn cartilage in his left knee when camp opened. He’s making good progress, but the injury left him behind in his throwing program.

Simon made 16 starts for Baltimore in 2011 and welcomes the chance to move into a starter’s role, even if it’s only temporary.

“I’m ready to go,” Simon said. “I know it has been two years (since) I have started a game, but if I get the opportunity, I’m going to show Bryan Price that I can be a starter.”

The 32-year-old had started a total of three games in the majors when the Orioles moved him into the rotation in 2011. He went 4-9 with a 4.90 ERA in 16 starts and seven relief appearances that season.

Price planned to use him out of the bullpen again until Latos got hurt. Left-hander Tony Cingrani was the main option as an extra starter last season, but has the fifth spot in the rotation this year.

“We do know we are short one starter right now without Mat,” Price said. “If we were to have any setbacks where Mat was not ready to start the season, we have to look at the group we have and that would include Simon.

“He has the starter’s background. He has a very, very durable arm. We have to look at him in longer stretches.”

If Latos is ready to pitch at the start of the season, Simon can move back into the bullpen.

“I like starting,” Simon said. “I am here to do whatever they want. All of my career (in the minors) I was a starter. Sometimes I would throw one or two innings. I can do more than that. I wanted to keep pitching. I miss it.”