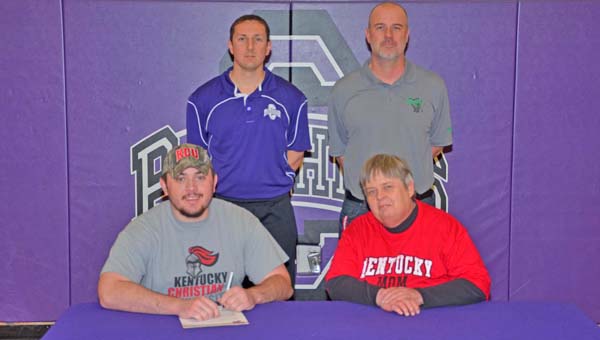 CHESAPEAKE — Mark McMillian had a lot of reasons for picking Kentucky Christian University.

The Knights didn’t care what the reasons were, just as long as they led the big lineman to them.

The 6-foot-2, 280-pound Chesapeake Panthers’ senior tackle made his college choice as he selected Kentucky Christian over Mount St. Joseph, Campbellsville, and Wilmington.

“It was easier financially. I feel like I fit in better where it’s a small college and I’m from a small school I fit in very well. I like the program and everything they’re doing,” said McMillian.

Not only is McMillian happy with his choice of schools, he is also pleased with the opportunity to play immediately at the next level.

“(The coaches) told me that I could actually come in and start next year. They said both the tackle positions are open. So that’s my goal. I’m going to work and at least try to attempt to start next season or at least be a backup,” the Panthers’ lineman said.

McMillian suffered a broken leg and did not play in the final four games last season. He said the leg has healed but the only lingering affects are mental.

“It’s a little bit of a concern. I’m nervous about that, but I’m not really going to let it affect me,” said McMillian.

“I’m going to keep working at it and when I show up (at KCU) I’m just going to work hard and forget about it like it’s not even there and do my best.”

Chesapeake coach Andy Clark praised McMillian’s ability and work ethic, and he noted that the leg injury had an impact on the Panthers’ performance at the end of the season.

“As an offensive lineman, Mark is one of those guys that when you watch him on film he’s got a little nasty in him when he finishes off blocks. He’s pretty self-driven,” said Clark.

“He’s a great asset to have. I wish we could have had him a lot longer this year than we did. He does a good job. He became a pretty good technician the older her got. He really worked at it and it showed this year when he was able to play.”

Mark is the son of Emily Gano.

Jim Walker jim.walker@irontontribune.com   The St. Joseph Flyers have been on the road a lot this season, but they won’t... read more