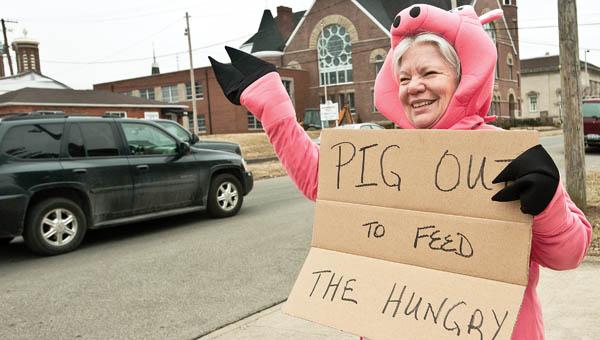 Lois Terkhorn drums up business dressed as a pig.

Burlington Elementary first-grade teacher Lois Terkhorn doesn’t usually stand in the parking lot of Harvest for the Hungry dressed as a pig, but she did on Saturday.

In celebration of National Pig Day and to raise money for the food pantry, Harvest for the Hungry partnered with Stoker Bar-B-Que for a “Pig Out to Feed the Hungry” fundraiser.

“It’s going really well,” Diane Porter, director of Harvest for the Hungry, said. “We have been here two hours so far and the people are steadily coming in.”

For $2.50 patrons could buy either a barbecue sandwich or loin strips. Hot dogs were available at a lower price and drinks, chips and cookies were also available fare.

“We are almost sold out,” McComas said at 1:10 p.m. “I spent the whole week pulling pork and thought we would have some leftover. It looks like we are just going to make it.”

The event lasted from 11 a.m.-2 p.m. and Russell said when he and McComas arrived at the pantry Saturday morning he “thought we would be here until 4 p.m. trying to get rid of this pork, but it’s not looking like that’s going to happen.”

All proceeds went toward food for Harvest for the Hungry, which feeds families and individuals in need.

Raffle tickets for chances on half a pig are also being sold for $5 each or three for $10.

Contact Harvest for the Hungry at 740-532-1196 for more information and to pay for or place an order.