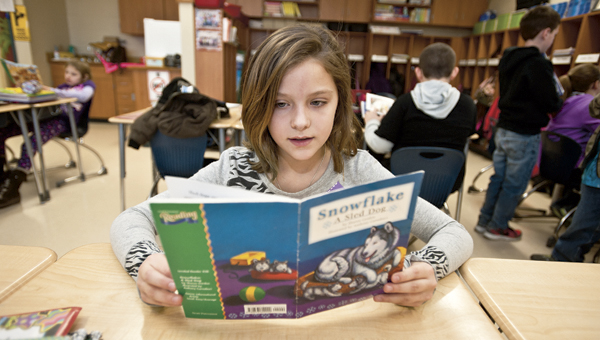 The students participated in the third annual “Read the Most Coast to Coast” challenge. The goal of the nationwide event is for students across the country to take at least 5 million Accelerated Reader (AR) quizzes in one day.

“A lot of my students took books home last night so they could come in today and take the quizzes,” Jeremy Dillon, third-grade language arts teacher at Dawson-Bryant said on Friday. “These students are very self-motivated. They pick the books, logon and take the test, then start again with another one. There is no downtime today; it’s pretty much nonstop reading.”

The students’ goal was to aid thousands of other students across the country in beating the one-day record for Accelerated Reader quizzes taken, which was set at 4,409,622 last year. The students fell just short of the 5 million quiz goal but surpassed last year’s total by more than 500,000 and set the new one-day record with 4,987,949.

At 10:03 a.m. 827,000 quizzes had been taken nationwide. Dillon’s and third-grade reading teacher Julie Sturgill’s classes watched a projection screen with a running total during the event. Renaissance Learning tracked national quizzes on its hosted database and shared progress online. By 10:30 the total had surpassed a million quizzes and Dillon’s class erupted in cheers upon reaching the mark.

Collectively the 94 third-graders at Dawson-Bryant Elementary have accumulated 3,000 AR points. Although this marked the school’s first year participating in “Read Coast to Coast,” the competition among students has been alive and well for some time.

“Homerooms compete against one another,” Sturgill said. “Individual students are recognized for reaching benchmarks in points, too. Every time one of the students reaches a certain amount of points they get a star on the wall in the hallway and their name is announced. At the end of the year all students who have earned 100 or more AR points get to go to lunch at Gattiland.”

The interschool competition is working. Sturgill said the number of students who earned a trip to Gattiland two years ago was 10; last year it was 57.

“We had to take a bus last year because there were so many,” she said. “We anticipate just as many or more this year.”

An added incentive is one with universal appeal: cash. Once students achieve 150 AR points they earn one AR dollar for every 25 subsequent points. All but one student in Ronda Hall’s fifth-grade homeroom have earned 125 points; the one who hasn’t has 120.

“Students read for 15 minutes in homeroom every morning and during any other downtime,” Dillon said. “Otherwise they read at home and stay after school and take the quizzes.”

Third-grader Landon Davis has amassed the coveted 125 AR points mark and was busy reading the “Magic School Bus Blasts Into Space” so he could contribute to the nationwide effort.

“I’ve probably read more than 100 AR books,” he said. “My favorite type of book is chapter books and I like to read A to Z Mysteries the most.”

Davis said he reads whenever he can. He plays sports and likes watching cartoons and movies, particularly Star Wars. He and his brother even read in the car on the way to and from school, he said.

“If I know a book has been made into a movie I purposely read the book before watching the movie,” he said.

All 200 students who participated at Dawson-Bryant will receive a Certificate of National Participation.

The web-based program provides access to 160,000 quizzes and enables students to choose from a variety of fiction and nonfiction books.

In two months the county will hold its first primary since 2012.Then, election officials had a pretty good idea of... read more