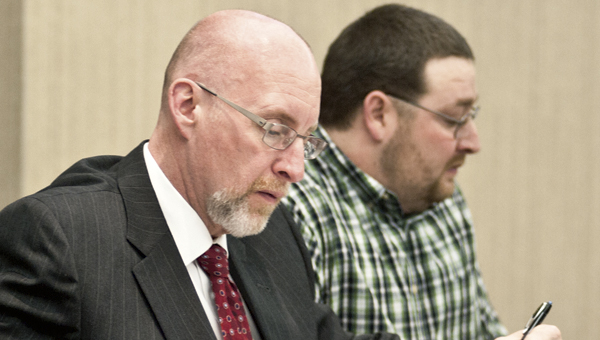 An Ironton man on trial for murder wiped away tears as the jury listened to the recording of his reaction to the news that his brother-in-law was dead.

“What have I done?” the man sobbed on the recording. “I don’t remember it.”

Tuesday began the second day of the trial against 34-year-old Rodney “Rocky” Delawder, who allegedly shot and killed John A. McKnight, 48, at their home on State Route 243 on Jan. 29, 2013. He is also charged with second-degree felonious assault against his other brother-in-law, Larry J. McKnight, 46, and second-degree improperly discharging a firearm into a habitation.

But the bulk of the day was spent listening to audiotapes of Delawder’s initial questioning the night of the shooting. Lawrence County Sheriff Detective Aaron Bollinger, who initially questioned Delawder, testified as well.

According to the recordings, Delawder told Bollinger he didn’t remember anything about the incident, just that the McKnight’s brothers jumped on him outside the home shared by the men, Carolyn McKnight and Delawder’s wife.

Delawder also denied firing a gun, although a gun residue test performed on his hands showed a positive reading that he recently fired a gun, according to the recording.

As Bollinger’s interview with Delawder continued, the man revealed more details of the incident, including that he allegedly confronted his two brothers-in-law about sexually abusing their sister, Delawder’s wife.

“That’s when everything broke loose,” Delawder said in the recording.

Delawder said he remembered hearing a gun shot, but couldn’t remember firing a gun or even why or how he could have gotten a gun.

When he learned John McKnight was dead as a result of a gunshot wound, Delawder began sobbing uncontrollably.

Carolyn McKnight testified she saw Delawder kicking Larry McKnight in the head and face. She said Larry managed to get himself into the house but collapsed on the floor.

She also said she saw John McKnight and Delawder fighting over a gun. When Delawder gained control of the weapon, John came into the house and tried to bar Delawder from entering.

Larry testified he remembered being kicked by Delawder, but couldn’t remember how he got back into the house.

Gerston testified that he performed the autopsy on John McKnight and determined the cause of death to be from a penetrating bullet wound that punctured the man’s lung and heart.

Witnesses for the prosecution are scheduled to continue today, included more testimony from Bollinger.

The Ironton Police Department has made some key arrests in the past several days including a person of interest in... read more