Murder case given to jury 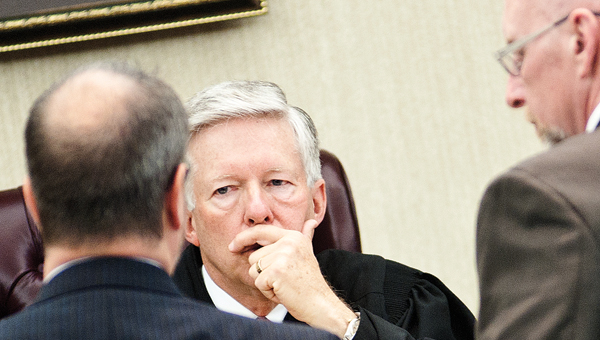 Prosecuting Attorney Brigham Anderson said evidence points to Rodney Delawder, the man’s brother-in-law who fled the scene and was arrested later that night.

Mike Davenport, Delawder’s attorney, suggests it was Larry McKnight, Delawder’s other brother-in-law who loaded the gun, which fired during a struggle between the two men.

After four days of witness testimony, more than 100 exhibits of evidence and remarks from both attorneys, a jury of 12 will decide the fate of Delawder, who was charged with murder, felonious assault and improperly discharging a firearm into a home or habitation as a result of the incident.

The jury deliberated for nearly two hours following closing arguments Thursday but was unable to reach a verdict before 6 p.m., at which time they decided to call it a day.

The jury was expected to resume deliberations today.

On Thursday, Davenport called his witnesses to the stand, which included Delawder’s stepdaughter, Hannah Bowman, and an inmate named James Schwab, who said he spoke with Larry McKnight several months after the shooting.

Bowman testified she saw Delawder and Larry McKnight fighting at the residence on State Route 243 the night of the shooting. She said she saw Delawder kicking Larry, after which time Larry attempted to crawl away.

Bowman also said she saw Larry “dart” into the smokehouse, the out building referred to during the trial where Larry slept and also kept the shotgun used to shoot John McKnight.

During Schwab’s testimony, he said he saw Larry several months after the shooting at a carry-out. He said Larry told him Larry got the gun from the smokehouse because “he was tired of Rodney beating him up,” and that the gun fired while Delawder was trying to get the gun away from Larry.

Schwab also spent some time in the Lawrence County Jail, where he was a cellmate of Delawder’s, and was also represented by Davenport, Anderson said during cross-examination.

Also, DNA evidence from a shotgun shell that was tested Wednesday evening at the request of Davenport was returned Thursday afternoon but showed no DNA profile.

During closing arguments, Anderson recapped the evidence he presented throughout the trial.

He reiterated that Delawder had motive for shooting John, being that his wife, John and Larry’s sister, told him the men sexually assaulted her years before. The night of the incident, Delawder admitted during a recorded interview that he confronted the brothers about the assault, which resulted in a fight.

“’When you get mad and blackout. You don’t know what goes on,’” Anderson quoted from Delawder’s recorded interview with Detective Aaron Bollinger.

“Larry is not the person who got this gun,” Anderson told the jury. “It was Rodney.”

Davenport reiterated that Larry was the one who loaded the shotgun, based on testimony from Schwab and Bowman. He also asked the jury to disregard the testimony of John and Larry’s mother, Carolyn McKnight, due to her frail emotional state and schizophrenia diagnosis.

“With her condition, she lives in a world of her own making,” Davenport said. “If it’s unpleasant to her, it doesn’t exist. She is trying to protect the only son she has left, and who could blame her.”

Rodney “Rocky” Delawder of Ironton has been found guilty of the murder of his brother-in-law, John A. McKnight. The verdict... read more