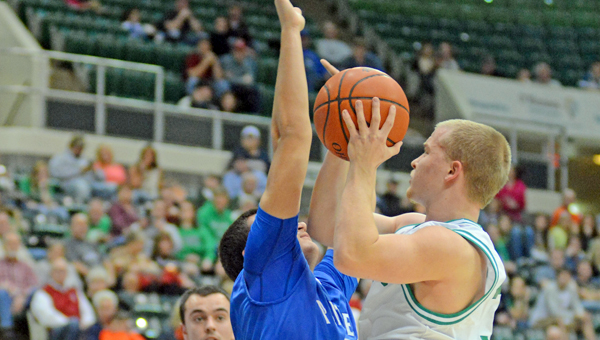 ATHENS — It wasn’t the physical part of the game that bothered Fairland coach Nathan Speed, it was the mental aspect.

Speed wasn’t pleased with his team’s mental approach in the first half. Once the Dragons got their minds set, they rallied from a 16-point deficit and beat the Southeastern Panthers 58-56 Friday in the Division III district semifinals at Ohio University.

“In the beginning we just stood around and looked at each other. We just played weak. That’s one of the things we talked about at halftime,” said Speed.

“We just looked scared. We looked weak and soft. It was just ugly to watch. I told them I didn’t care if they didn’t score another basket, just stop being so weak and timid.”

The Dragons outscored the Panthers 39-23 in the second half including 20-11 in the fourth quarter.

With the win, Fairland (14-11) will play Wheelersburg at 2 p.m. Sunday in the district finals.

Leading scorer Evan Maddox had nine points despite playing with an injured back that forced him out of the game on a couple of occasions.

“With Evan hurt tonight, we didn’t have any time to adjust to it. We didn’t know how we were going to be able to play,” said Speed.

The Dragons started hot as they jumped out to a 10-5 lead. Maddox drained a long 3-pointer to start the game and Short scored seven points in the spurt including a 3-pointer.

“It wasn’t that we were playing great offensively, we were just getting good open looks and knocking it down. We really weren’t really moving that well. We were standing and not cutting. Then we did a better job screening, getting guys open, moving without the ball. We learned to play without Evan,” said Speed.

Short hit a 15-footer but Allen followed up another missed shot just before the buzzer and it was 15-14.

After a quick trade of two points, Southeastern scored six unanswered points for a 23-16 lead.

But the Panthers closed the half with a 10-0 run that included triples by Dylan Miles and Kannon Straughsbaugh and the lead was 33-19 at the break.

Fairland came out hot again in the second half with Short scoring another seven points in the quarter.

“We told them they were going to score. You’re not going to get it all back right away. Try to cut it to seven or eight to start the fourth quarter and then we’ll make our run in the fourth,” said Speed.

The Dragons used defense to fuel the fourth quarter comeback, forcing seven turnovers and limiting the Panthers to 4-of-15 shooting.

A steal by Tyler Campbell gave the Dragons the ball and he came to the other end of the court and hit a 15-footer and the lead was 53-50 with 1:17 to play.

Hice buried a long 3-pointer with seven seconds left and the Panthers were within 57-56.

Thayer Flynn was fouled on the inbounds and made the first of two shots for a 58-56 lead.

Allen rebounded the second shot and the Panthers got the ball down the court quickly. Justin Dye’s 3-pointer attempt from the right corner hit the front of the rim as the horn sounded and the Dragons had survived.

PEORIA, Ariz. (AP) — Chris Heisey is confident in knowing he doesn’t have to put a lot of pressure on... read more