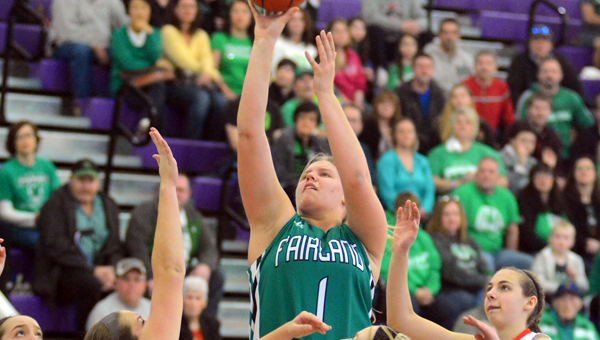 LOGAN — It’s not over yet for the Fairland Lady Dragons.

Fairland battled through the Sugarcreek Garaway Lady Pirates for a 52-46 win Saturday and the Division III regional championship.

After losing the past two seasons in the regional semifinals, the Lady Dragons goal was to make the state tournament and beyond.

For now, they have the state tournament. A state championship is still alive on the list of goals.

“Our message all year was not to be satisfied,” said Fairland coach Jon Buchanan. “We’re going to compete (Friday) and ultimately play on Saturday. We want to end this season with a state championship.

Fairland (22-3) will play at 3 p.m. on Friday in the state tournament at the Schottenstein Center on the campus of Ohio State University.

Getting to the Final Four didn’t come without a fight. The Lady Dragons led by only one at halftime, trailed after three quarters and had to battle to the final buzzer.

“We knew it was going to be tough. Sugarcreek Garaway is too good for it not to be a dogfight. They had a bunch of skilled, tough players and the game was how we thought it would be. We plays and free throws at the end and got out of here with a win,” said Buchanan.

“We’re definitely excited for the win, but we’re not satisfied,” said Stapleton. “We’ve been like a family helping and challenging each other every day to get better.”

Garaway used a 10-o first quarter run to take a 12-2 lead with a little more than two minutes left in the opening stanza as the Lady Pirates doubled Stapleton from behind and forced several turnovers.

Putt nailed back-to-back triple in the first minute of the third quarter to give Garaway a 23-18 lead.

Putt scored 12 of her points in the quarter.

A three-point play by Stapleton sent the Lady Dragons ahead during another 8-0 run and she later connected on a semi-hook off the right block for a 30-27 led with 2:12 on the clock.

However, Putt made two baskets — the last being a running jumper off the right win with 13 seconds left — as Garaway took a 31-30 lead into the final eight minutes.

Fairland tied the game to begin the fourth quarter and then Slemmer hit a triple from the left of the key to put the Lady Pirates back in front.

The Lady Dragons countered with six unanswered points to lead 37-34. But Garaway regained the lead at 38-37 when Walter’s hit a pull-up jumper in the lane with 3:11 to play.

Fairland then put together the key stretch of the game by going on a 10-0 run. Stapleton hit a pair of foul shots with 2:59 left that gave the lady Dragons the lead for good.

Caitlin Stone hit the front end of two foul shots wit 2:18 left, but Stapleton got the rebound and scored on the putback. Taylor Perry then stole the inbounds pass and made a layup for Fairland’s final field goal of the game and a 44-38 lead.

The Lady Dragons extended their lead to 47-38 with under a minute to play, but Garaway wouldn’t quit.

Putt turned a steal into a layup to pull Garaway within 47-40 with 50.5 seconds left. After Fairland misses two foul shots. Slemmer drilled a triple from the left of the key with 32 seconds left.

Mackenzie Riley sank a pair of foul shots with 28,8 left as Fairland’s lead went back to a six-point cushion.

Walter drained a 3-pointer and it was a one possession game at 49-46 with 24 seconds to go,

But Garaway never got the ball with a chance to tie or take the lead. Riley made a free throw with 17 seconds left. Garaway missed on its next attempt and Kelsey Riley grabbed the rebound and was fouled. She made the two clinching free throws with 4.5 seconds remaining.

(NOTE: Craig Dunn of the Logan Daily News contributed to this story.)