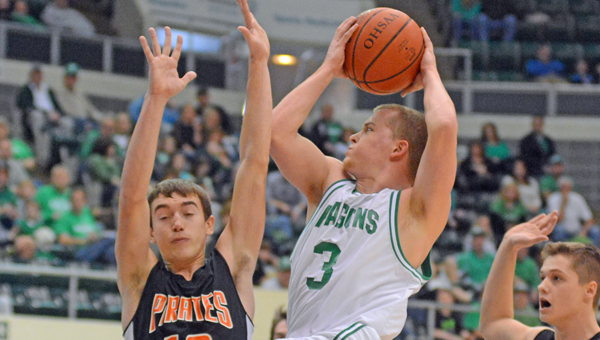 ATHENS — Doing the right thing turned out to be the wrong way for the Fairland Dragons.

With the game tied and only seconds left, Fairland had the right defense and executed it well. But going hard turned out to be the lucky break Wheelersburg needed.

Although Dylan Miller missed a game-winning shot near the basket, teammate J.D. Widdig got the backside rebound and scored with four seconds left to lift the Pirates to a 52-50 win over the Dragons to capture the Division III district title at Ohio University on Sunday.

“It was just one of those things. (Widdig) did the right thing. He went hard for the rebound. I think we did the right thing in coming over, helping double, trying to force (Miller) at least to get something back away from the basket instead of going to the basket,” said Fairland coach Nathan Speed.

“(Widdig) saw it coming. I think it’s one of those situations that you’re so locked in on getting the stop, the shot goes up and you’re thinking time is going to run out. It’s just a situation where they ended up with a big overload on that side of the floor. Our kids got sucked into Miller, getting help side, getting over, we just got sucked in so far there wasn’t anybody coming in to box out.”

Things just didn’t seem to go right the entire game for the Dragons. Evan Maddox played but left the game on several occasions to get quick stretching treatment on his back that has a bad disc.

Chance Short fouled out in the third quarter on two rapid fouls.

Maddox and Short — who average a combined 31 points a game — were scoreless in the first half. Each finished with five points.

Wheelersburg scored the first six points of the game. A layup by Nathan Campbell got the Dragons within 8-4 at the end of the quarter.

The Dragons took a 12-11 lead on two foul shots by Thayer Flynn at the 5:02 mark for Fairland’s only lead of the game. The Pirates got a short runner by Miller and a 14-footer by Austin May at the buzzer for a 26-20 lead at the break.

The Dragons battled back to tie the game 31-31 on a layup by Campbell with two minutes left in the third quarter. Miller had a layup and two foul shots as the Pirates were up 35-31 heading into the final eight minutes.

“The first half I thought we were still a little sluggish offensively. The second half we did a better job of getting in the flow and movement and creating space and getting to the basket,” said Speed. “Defensively it was pretty good. We gave a great effort.”

Miller sank two foul shots but Flynn converted a three-point play and it was 48-48 with 1:02 left

Widdig made two foul shots but a driving layup by Phillips tied the game with 28 seconds to play.

Wheelersburg then ran time off the clock and set up its final play.

“I thought Luke did great. Luke’s did well all year. He always guarding the toughest player on the other team. He’s playing long, long minutes. He just doesn’t quit. He just keeps going,” said Speed.

The Pirates (16-8) were led by Miller with 21 points and six rebounds.

“The senior guys have been in the district finals three of the last four years. Last year they got lost in the district semi. They made a good run. I think that’s one thing they’ll be remembered for. They always played hard. They’re scrappy,” said Speed.

“The senior guys have been in the district finals three of the last four years. Last year they got lost in the district semi. They made a good run. I think that’s one thing they’ll be remembered for. They always played hard. They’re scrappy,” said Speed.

Jim Walker jim.walker@irontontribune.com   PROCTORVILLE — Here are the numbers, but they are just numbers. All the numbers are impressive... read more