Race brings out competitors of all shapes, sizes, breeds 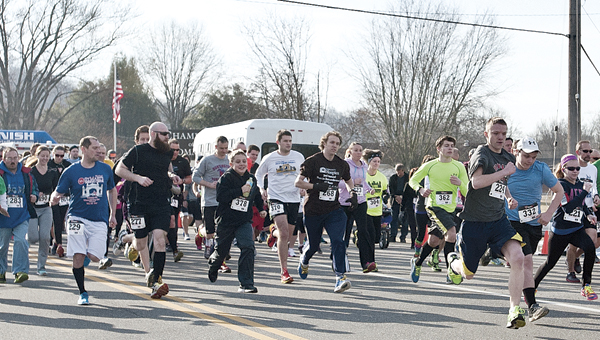 THE TRIBUNE/JESSICA ST JAMES
Participants take off from the start line Saturday morning as make their way into The Point Industrial Park during the Board of DD 5k Run Walk event.

SOUTH POINT — Ten minutes before race time Rosie looked bored. Decked out in her pink and purple harness, the beagle mix was wondering when the running would start.

This was the first time for her and her master/running partner, Brandon McCoy, to compete in the annual Board of DD 5K Race on Saturday morning at The Point industrial park.

Making it a family affair for McCoy of Russell, Ky. was his niece, MacKenzie Jenkins. McCoy got into 5K races because of his older brother.

“He’s running them all the time,” McCoy said. “My goal is to beat him.”

Although his goal was well-defined, he candidly admitted it probably wouldn’t be reached anytime soon. His brother’s best time is 19 minutes; McCoy’s comes in at 31 minutes.

Rosie didn’t seem to be sure why she was there, but as the time clock hit five seconds before the starter’s pistol was set to go off, she was up on her feet, prancing in anticipation of something happening soon.

The race, part of the board’s annual DD Awareness Month, brought out the largest turnout so far, surpassing the 180 who came over the finish line last year.

“We are increasing our numbers and awareness,” Tim Nunnery, public information director for the Board of Developmental Disabilities, said. “The weather started to break and people are tired of running on the treadmill. This is one of the first events of the season. We have been lucky to have great weather.”

Veteran runner Joe DeLapa, of South Point, was trying the DD 5K for the first time. Usually his venues are in West Virginia.

“I like the exercise and being a part of the community,” he said.

Another first-timer was Ledusta Abner, of Ironton, who is good friends with a teacher at the Open Door School and encouraged her to participate.

“I think the cause affects so many people and families in our area,” she said.

When the clock struck 9 a.m., about 200 runners were off, down Collins Avenue heading for the industrial park.

The race is one of four Board of DD events in March whose goal is to draw awareness to the Open Door School and Tri-State Industries programs. The annual balloon launch started off the month that will also feature three basketball games with Open Door and Tri-State Industries players as well as media versus Lawrence County officeholders. Those games are set to start at 6 p.m. March 18. On Saturday, March 22, is the Chili Fest and Craft Show.

As Pat Riley of Tri-State Racers set up the finish line, the time clock blinked the minutes and seconds. At 18:15 the first two runners came back into sight.

“There are our top two runners, 150 yards from here,” Riley announced.

Another almost seven minutes passed before Susan Williams became the first overall winner in the women’s division at 26:32.

Then more and more runners came down the main drive when at 32 minutes into the race came Rosie and McCoy neck and neck. A couple of times Rosie darted in front of her partner getting her lead tied up momentarily shaving off precious seconds. But the pair quickly recovered to cross the finish line together at 35:27.

“Good job. Good job,” McCoy told the beagle, who barely looked winded, as he knelt down to pet her. Then if it was off to grab some bottles of water and dream about their next 5K.

The Winter Crisis Program deadline has been extended from March 31 to April 15. The Ironton-Lawrence County Community Action Organization... read more