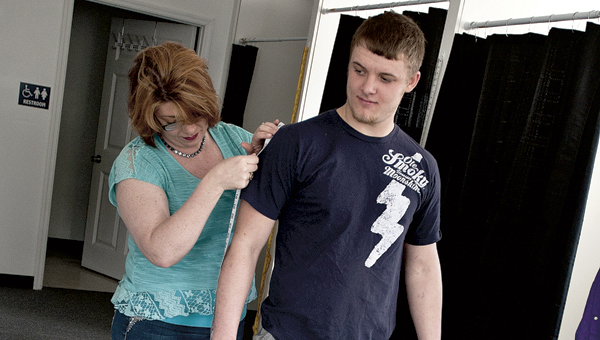 COAL GROVE — Tracy Ferguson is now all about bowties.

After years of specializing in prom and bridesmaids’ dresses through Glitters, her former boutique, she now turns her attention almost exclusively to males with her new endeavor “A Black Tie” formal wear in Coal Grove.

“I’ve been doing tuxedo rentals for the past 10 years out of (All That Salon),” she said. “I did all the local county schools’ proms last year and I was flattered they asked me to do it.”

Glitters prom dress shop opened in Coal Grove more than six years ago as part of All That Salon and moved to downtown Ironton two years later. It occupied the space now being used by Dick’s Music Shop for three years before something unexpected happened in 2012.

“I found out I was pregnant,” Ferguson said. “That was a heck of a year for me for sure.”

Now with three daughters ages 21, 16 and 15 months, Ferguson, who sold All That several years ago and still worked there, has stopped working at the salon. She said her plan is to do tuxedos full time.

“The featured product (A Black Tie) offers is tuxedos,” she said. “I do sell bridesmaids’ dresses because when I had Glitters a girl asked me to do bridesmaids dresses so I did, but this is a tuxedo shop.”

Tuxes range from $65 to $200 with the average costing around $100. For Jordan Sherman, of Ironton, and Courtney Hanshaw, of South Point, Ferguson couldn’t have opened her business at a more opportune time.

“There was a mix-up with the bridesmaids’ dresses we ordered from a store over in Ashland, Ky.,” Hanshaw, who will marry Sherman on March 15, said. “Two were different shades of purple than the others.”

While Hanshaw worked with Ferguson to make the bridesmaids’ dresses copasetic, Sherman perused books looking for matching vests for his groomsmen.

A Black Tie does have formal dresses for sale but Ferguson said when what she has is gone, then they’re gone.

“We have a variety of sizes and styles of formal dresses no more than five years old,” she said. “They are reasonably priced and some still have the tags.”

To determine what others feel strongly about nowadays one has to look no further than social media. Corbin Ramey created... read more