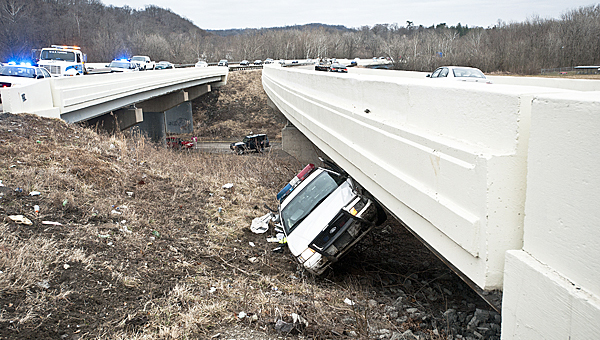 A Coal Grove police officer was taken to a local hospital following an accident on U.S. 52 Wednesday evening.

Officer Jake Emnett was taken to the trauma center at St. Mary’s Medical Center in Huntington, W.Va., after he crashed his cruiser while en route to a call.

The accident happened about 4:20 p.m. at the highway’s twin bridges above Muth Lumber.

According to CGPD Chief Eric Spurlock, Emnett was traveling eastbound on U.S. 52 when he lost control near the overpass above Muth Lumber. The cruiser went down the median and ended up on its side, wedged just below the overpass with the front of the car facing westbound.

Spurlock said the officer was responding to a residential alarm call on Washington Street and had his lights and sirens on.

According to Spurlock, witnesses said the cruiser appeared to be going about 90 miles per hour when the accident happened.

Spurlock said the officer was speaking and moving before he was transported and was expected to be released from the hospital that evening.

Spurlock also said the officer was wearing a seat belt and had gotten himself out of the cruiser before other units responded.

Spurlock said the officer will undergo a drug test, as is routine in this type of situation.

The Ironton and Coal Grove police departments responded to the scene, as well as the sheriff’s office, Ironton Fire Department, Ohio State Highway Patrol, Coal Grove fire chief and Lawrence County EMS. Coal Grove Mayor Larry McDaniel was also on the scene. Westbound U.S. 52 was reduced to one lane during the accident cleanup.

THE TRIBUNE/JESSICA ST JAMESA makeshift gate is attached to the original entrance leading to Woodland Cemetery. Those who have visited... read more