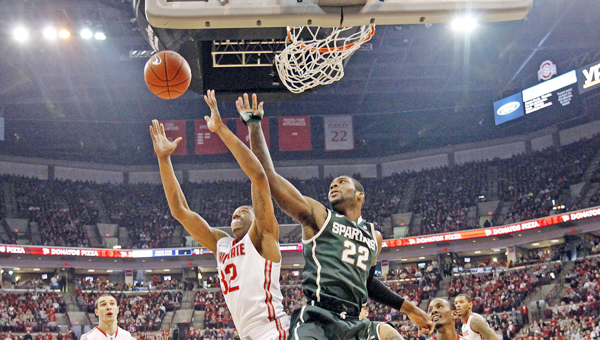 Now the Wolverines will get a chance to end another title drought in the conference tournament, which has been filled with some of the school’s most forgettable basketball moments — from Evan Turner’s 40-foot buzzer-beater for Ohio State to the embarrassment of having the 1998 title stripped away because of NCAA sanctions.

Maybe this time, Michigan can put those images behind it for good.

“You’ve just got to go and get through those first games and really play well,” coach John Beilein said before leaving for Indianapolis. “You’ve got to find ways to get lucky and got to find times to play hard and if you can, you’ll be sitting there in the championship game.”

They have the conference’s player of the year, Nik Stauskas, and the media’s choice for coach of the year in Beilein. They have a five-game winning streak and 15 wins in conference play. They have multiple NBA prospects and for the first time in school history, the defending national runner-ups are seeded No. 1.

But Beilein also is well aware of what can go wrong in the postseason.

He led the Wolverines to semifinal appearances in 2011 and 2012, but they haven’t played for a title since or won more than one game in a single tourney since that ’98 championship run, which was later expunged.

Michigan’s march toward redemption begins Friday against either eighth-seeded Indiana (17-14) or ninth-seeded Illinois (18-13, who play Thursday.

Here are five things to look for this week in Indianapolis.

PLAY-IN GAMES: Most tourney analysts believe six Big Ten teams will get NCAA tournament bids. A seventh could get in with a strong tourney run. The two teams with the most to gain or lose this week appear to be Minnesota and Nebraska.

PETTEWAY’S PUSH: Terran Petteway had a breakout season for the Cornhuskers, averaging 18 points and earning all-league honors. He also has the Cornhuskers going into the postseason as one of the league’s hottest teams with 10 wins in 12 games. The Nebraska women won their first-ever conference tournament title Sunday at Bankers Life Fieldhouse, which prompted coach Connie Yori to declare that Nebraska is no longer just a football school. Now the men’s team has a chance to prove it.

HEALTHY SPARTANS: Michigan State coach Tom Izzo does his best work in March and April and there’s no place he’d rather be than Indy. Here, Izzo has won a tourney title, his lone national championship and a regional final that allowed the Spartans to make a Final Four appearance in suburban Detroit. Can he do it again? Perhaps. His team, once considered a national title contender, is finally getting healthy.

THE RED BADGERS: Wisconsin regained its mojo during the second half of the conference season and is now moving full steam ahead into the postseason. How good are these Badgers? They were ranked in the top five in January and were one of the last undefeated teams in the nation. After a midseason slump, the Badgers are playing well again.

HOME-STATE WOES: Purdue and Indiana have struggled all season with consistency. While some think the two Indiana schools have an inherent home-court advantage, Purdue has only won one title (2009) and the Hoosiers haven’t won any — numbers that aren’t expected to change this year.

Jim Walker jim.walker@irontontribune.com   Smithville is back in the girls Division III state tournament for the third time in five... read more