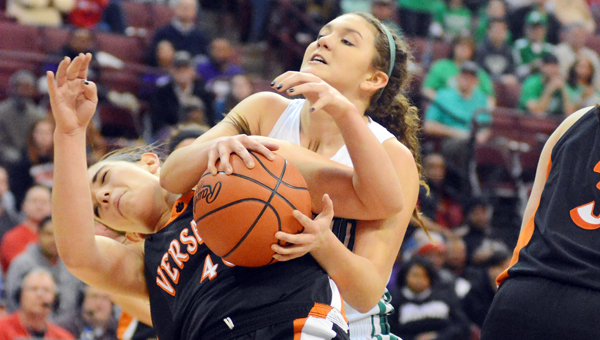 COLUMBUS — It was like a WWE tag team match, only one team had to go solo.

The tag team combined for 28 points and 13 rebounds while Stapleton had 11 points, eight rebounds and three blocked shots.

With the duo neutralizing Stapleton and Versailles using as many as 10 players, the Lady Tigers managed to wear on the Lady Dragons and come away with a 67-60 win at the Ohio State University Schottenstein Center.

“We had to double on (Stapleton) a lot. A lot of times they were single-handily just pushing her out and keeping her as far out from the basket as possible. Basically, they ganged her. A couple of times in there they just made her work,” said Versailles coach Jacki Stonebraker.

“I thought we could do that to her. If anything, get her in a little foul trouble, get her on her heels a little bit. They weren’t afraid.”

Fairland coach Jon Buchanan said his team played well, but ultimately it was Versailles’ ability to get the ball inside to its two bigs that was key.

“I thought our kids played hard and executed our game plan. Obviously, Versailles is very deep. They have good size. They did a great job getting the ball inside,” said Buchanan.

“I thought we did an excellent job in the first half keeping them from doing that. The second half they did a better job of getting the ball inside on us.”

The Lady Dragons — playing in their first-ever state tournament — used a pair of baskets by Stapleton to jump out in front and led 12-2 lead after a layup by Taylor Perry at the 2:46 mark.

“(Stapleton) is very strong, very strong girl. A lot stronger than what I am,” said Stonebraker who tried to help simulate Stapleton in practice.

Fairland’s press bothered the Lady Tigers who turned the ball over eight times in the quarter and 23 times for the game.

Versailles went on a 6-2 run to end the quarter and trailed 14-10. A 3-pointer by Rachel Kremer off the bench to start the second quarter made it 14-13.

Mackenzie Riley answered with a layup and Fairland led 16-13. Versailles then got back-to-back baskets by Puthoff to take a 17-16 lead.

The Lady Tigers were up 24-19 on a short-range shot by Heckman, but Fairland came back to take a 25-24 lead on an 18-footer by Chandler Fulks and two foul shots by Riley.

Fulks was playing despite suffering a knee injury in practice on Thursday that forced her to wear a brace and left her wincing in pain on numerous occasions.

“The adrenaline at first really, really helped. There were a couple of times when I really pushed it more than it wanted to be pushed. It hurt, but I would rather play on a broken knee and a bunch of torn ligaments than miss out on this, so I was trying to push through it as much as I could,” said Fulks.

Lauren Bruns runner in the lane with 26 seconds left gave Versailles a 26-25 lead at the half.

“We’re pretty banged up, not just Chandler, but a couple of other kids,” said Buchanan. “But, again, our school had never been to the state tournament in 53 years. Our kids aren’t going to pass up this opportunity to play.”

It was Fairland’s last lead of the game.

“They did very well on me, of course. Hats off to them. They did a very good job inside. I just wasn’t making shots,” said Stapleton.

But the Lady Tigers stretched the lead to 55-43 with 4:08 to play on a layup by Heckman off a pass from Puthoff.

“It was a lot of fun to go against a taller girl because I can bang a little bit more in there,” said Heckman.

“Sometimes I thought I was real lucky in there. I just tried to keep going up strong,” said Puthoff.

The fouls began to add up in the fourth quarter and the teams spent the final 2:50 of the game trading foul shots.

Fairland got within 56-51 on a steal and layup by Stone with 1:47 left, but Versailles converted 9-of-10 free throws down the stretch.

“They’re really good in transition. As the game went on, I felt the nine or 10 (players Versailles played) kind of paid off for them a little bit,” said Buchanan.

“There were a couple of plays here and there that really made the difference. We had a couple of shots maybe we’d like to have back. I felt we played excellent. Hats off to Versailles. They did a great job and finished plays when it was there for them.”

The wave of player substitutions and size helped the Lady Tigers out-rebounded Fairland 43-31.