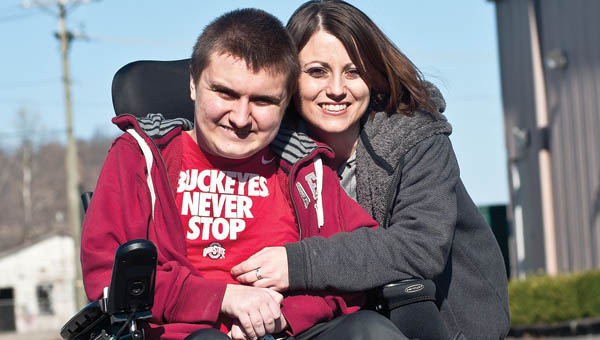 Campaign launched to win van for teen with muscular dystrophy

When Devyn Pritchard was 9 years old he told his mother, Becky Johnson, he needed to go to the bathroom but couldn’t get up.

“It seems like he’s been in a wheelchair ever since,” Becky said.

A muscle biopsy when Devyn was 11 months old revealed a genetic mutation.

“He had elevated muscle enzymes and they could tell what it was from that,” Becky said. “The doctors told us he had Duchenne muscular dystrophy.”

Duchenne muscular dystrophy (DMD) is rapidly progressive and occurs primarily in boys. It is caused by an alteration in a gene called the DMD gene, which can be inherited but often occurs in people from families without a known history of the condition.

“We were told that I am the Duchenne carrier,” Becky said. “No one else in the family has it.”

Individuals with DMD experience loss of muscle function and weakness, which begins in the lower limbs.

“Devyn didn’t begin walking until he was 15 months old,” Becky said. “We knew since he was diagnosed at 11 months he would one day be confined to a wheelchair.”

For the past three years the National Mobility Equipment Dealers Association has organized a contest as recognition of May being Mobility Awareness Month. The prize is a 2014 custom wheelchair accessible vehicle and Devyn, now 15, has been nominated as a “Local Hero,” which enters him in the contest.

Voting ends Friday, May. 9. The top-20 vote getters out of the 400 contestants nationwide advance to the second round. From there, they are judged based on their story and the top three are awarded vans.

Becky’s coworkers at Our Lady of Bellefonte Hospital in Russell, Ky., raised the money to purchase their current wheelchair accessible vehicle.

“Our current van has a lift, but no raised roof and is getting old,” Becky said. “When Devyn is in his chair inside the van he can’t move his head because there’s no headroom.”

The average price of a new wheelchair accessible van is more than $50,000 and the conversion alone cost more than $20,000. The possibility of getting a new van couldn’t come at a better time, Becky said, because Devyn is scheduled to have rods put in his back in a corrective surgery for scoliosis in May.

Their current van has had multiple mechanical problems. Becky has spent large amounts of money to repair the heating system. A new van would allow them safer and more reliable transportation to and from Devyn’s many doctor visits, Becky said.

“He regularly sees a pulmonologist and cardiologist,” Becky said. “He takes heart medication, has cardio myopathy and has annual MRI and an EKG every four months. If he doesn’t win, I will keep trying. I’ve been looking at several different grants just in case.”

Devyn also uses a CPAP machine for sleep apnea and recently had his adenoids removed to try to improve the condition. He also uses a cough machine to clear phlegm from his lungs and chest. Duchenne also makes Devyn significantly more susceptible to pneumonia.

Becky has three health insurance plans that help pay for Devyn’s medical expenses, including the power wheelchair he gets every five years at around $20,000. He got his current one last July.

Aside from the health and medical issues, Devyn is a teenager who likes to play video games and loves old cars. Riding dirt bikes and four-wheelers is something he speaks fondly about.

He keeps track of current events by continually watching the news and converses in detail about multiple cable TV shows. He attends Sharon Baptist Church in Ironton and was recently baptized.

He said he has researched outfitting their van so he can possibly drive, pending his passing the test.

Devyn performs range-of-motion exercises twice a day, works with a physical therapist once a week at school (he attends Rock Hill because Dawson-Bryant doesn’t have a special needs classroom), and undergoes aqua therapy once a week.

As he gets older his muscles get stiffer and more difficult to move, making even basic activities more arduous.

A home health aide spends eight hours a day seven days a week with Devyn to help with routine activities such as bathing and cooking.

Becky admits she is reluctant to have more children because of being the Duchenne carrier.

“I wish mom would have me a brother or sister,” he said. “But I don’t want her to have to go through with them what she has with me.”

To vote for Devyn:

• Scroll to the bottom of the page, enter “Devyn Pritchard” into the search for local heroes, State of Ohio, and hit the SEARCH button.

• Click on the extra vote button and answer the question so two votes will be counted for every vote cast. (Answers can be found on the website.)

• Choose your relationship to Devyn, most will be friend or family, accept the terms and click on “vote.”

Bridge project to start this week

PROCTORVILLE — Preliminary work to replace the bridge over Indian Guyan Creek on State Route 7 is expected to begin... read more