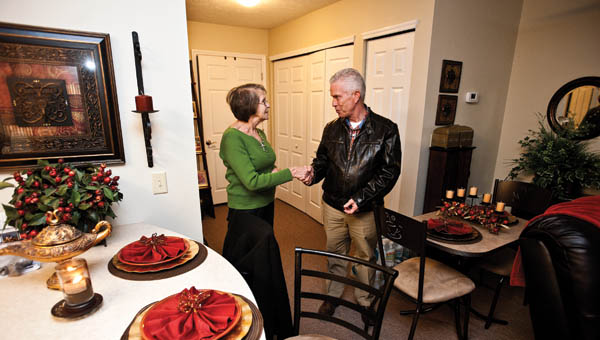 The low income housing complex was originally built in 1982 and underwent a nearly $8 million renovation last year. The renovations expanded the living space of the complex’s 70 units as well as making them more energy efficient and accessible.

“I lived in a place very much like this when I was a youngster,” Johnson said. “It brings back a lot of memories for me especially seeing all the bicycles out there.”

The Lawrence Village complex is more than 30 years old, and without the renovations the rental community was in danger of falling into disrepair and out of code. That’s when a development team made up of the Wallick-Hendy Development Company and the Ironton-Lawrence County Community Action Organization stepped in to seek the funding to update Lawrence Village.

Utilizing the Federal 9 percent Low-Income Housing Tax Credit the development team was able to secure $5.8 million for the project. Another $1.35 million was acquired via a term loan through First Merit Bank.

“The renovations took a year to complete,” Tim Swiney, Vice President of Wallick-Hendy Development said. “The site was updated to meet ADA accessibility requirements. Washer and dryer hook ups were installed in each unit. The roofs, windows, doors and siding were replaced. A lot of work went into upgrade the property.”

Adjacent to the Lawrence Village is another property owned by WHD. The Lawrence Manor is a senior living housing complex for those over the age of 62 or the physically disabled. WHD along with the CAO are currently seeking funds to update that facility.

“The Lawrence Manor property was constructed the same time as the village property,” Swiney said. “It’s made up of 60 senior units and we are looking to renovate it in the same way we did the village. Through the 2014 tax credit we are hoping to get the funds so we can also provide health services to residents if we’re approved.”

Rep. Johnson was impressed with the interest and involvement of management at the two properties, and stressed how important offering safe and affordable housing is to growing a better community.

“The amount of engagement from the management is very impressive,” Johnson said. “Like I said I grew up in an environment like this. Everyone needs a hand up from time to time and places like this are vital for those people in transition. Also vital in building stronger communities.”